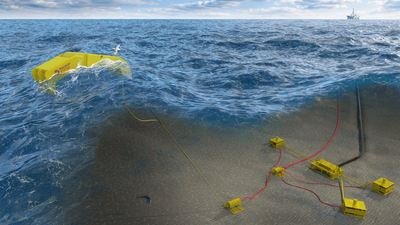 Edinburgh-based wave energy technology firm Mocean Energy has raised £850,000 (USD 1,1 million) to speed up the commercialization of its wave energy converter and deploy it to power subsea oil and gas equipment.

The Scottish start-up has raised £612,000 equity seed funding plus £250,000 from Innovate UK to advance the design of its Blue Star wave device and drive its adoption in subsea oil and gas.

The funding includes investment by Old College Capital, the University of Edinburgh’s in-house venture investment fund, and the Scottish Investment Bank, the investment arm of Scottish Enterprise. The equity funding unlocks a further £250,000 from Innovate UK, the UK’s innovation agency.

"Blue Star has been created from first principles to operate autonomously in remote locations and deliver green energy for a range of applications – including scientific ocean monitoring, aquaculture, oil and gas, and delivering energy to remote communities.

"We are currently working with firms in the Scottish supply chain to build and deliver our first prototype, which will commence testing at the European Marine Energy Centre in Orkney next year," McNatt said.

“The Innovate UK grant will enable us to advance our engineering design, including a new power take-off, moorings, and umbilical, and will deliver additional grant support to our project partners Newcastle University’s Electrical Power Research Group and Rosyth-based electronics-specialists Supply Design.

Earlier this year Mocean Energy announced a pilot project with the Oil and Gas Technology Centre (OGTC), oil major Chrysaor and subsea specialists EC-OG and Modus to study the potential to use their Blue Star prototype to power a subsea battery and a remote underwater vehicle.

Last year, Mocean Energy secured £3.3 million from Wave Energy Scotland to build and test a half-scale version of their technology at sea. The device is currently being completed at AJS Fabrication at Cowdenbeath in Fife.