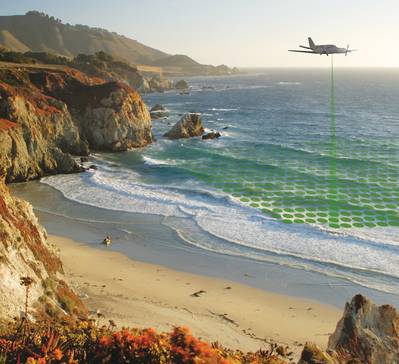 Fugro LADS Corporation is a leader in the design, manufacture, support and provision of Airborne LiDAR Bathymetry services, having been involved in The technology from the early 1990s. Fugro LADS Corporation designs, builds, supports and operates Fugro’s Laser Airborne Depth Sounder (LADS) systems worldwide.
Fugro LADS Corporation (FLC) is an Australian registered company, based in Adelaide, South Australia. FLC is part of the Offshore Survey Division of Fugro NV, based in the Netherlands, which is the largest hydrographic surveying company in the world. FLC, and its antecedents, have been engaged with ALB since the early 1990s and have pioneered the provision of contract ALB services to government agencies and industry since the late 1990s. Commencing in 1998, firstly as LADS Corporation and later as Tenix LADS Corporation, FLC was the first company in the world to provide such services on a commercial basis. FLC designs, manufactures, supports and operates the “Laser Airborne Depth Sounder” (LADS) ALB systems. These systems are equipped with a high-power laser, high efficiency optics and a large dynamic range receiver including patented automatic gain control to ensure the best signal-to-noise ratio possible is achieved for each sounding, even in areas of marginal water clarity. The LADS ALB sensors acquire both bathymetric soundings and topographic elevations, along with high resolution digital imagery and can also generate seabed relative reflectance data used for seabed classification and habitat mapping applications. Maximum depths can be measured to 80m, subject to water clarity.