Forensic Oceanography is a project that emerged out of Forensic Architecture based at Goldsmiths, University of London. Liquid Traces interrogates the impact of policies and practices of abandoning migrant vessels in distress in overlapping jurisdictions, as evidenced during the First Libyan Civil War in 2011.

The video reconstructs the route of a small boat that was carrying seventy-two people away from Libya in March 2011. It was left adrift for 14days in NATO’s maritime surveillance area following an engine failure. Despite sending several distress signals and encounters with military helicopters and ships, sixty-three passengers died.

Liquid Traces shows the potentially fatal consequences of border restrictions. In this case, the intersecting jurisdictions on the Mediterranean allowed states to step back. Using radar, satellite and vessel-tracking data, alongside personal testimonies, Forensic Oceanography modelled the impact these restrictions had in the case of the ‘Left to Die Boat’.

The report the video was based on was presented in numerous legal cases concerning non-assistance at sea, which are still ongoing to this date. While the Mediterranean remains the deadliest border zone in the world, today civil society actors have developed a stronger capacity to intervene, document and demand accountability for human rights violations at sea, thanks in part to the pioneering work of Forensic Oceanography.
The video was first shown at the ‘Forensis’ exhibition at the Haus der Kulturen der Welt in Berlin in March 2014. Since then, it has been screened around the world, including in Toronto, Rome, Barcelona, Mexico City and New York, before entering the permanent collection at the National Maritime Museum.

Megan Barford, Curator of Cartography, said ‘The acquisition of these ground-breaking works in the field of critical cartography allows the collections of the National Maritime Museum to reflect an important theme in contemporary mapping. In particular, the works show how techniques of maritime surveillance can be mobilised into tools of resistance, and they therefore help us to ask questions about the production and use of geographical data today.’

Lorenzo Pezzani of Forensic Oceanography said, ‘The history of the world oceans has been fundamentally shaped not only by mighty war ships, but also by the frail vessels that the dispossessed have used -and continue to use- to escape war and misery. At a time when museums are rethinking their societal role globally, we are thrilled that our work can contribute to make these other maritime histories heard to a wider public, and we are honoured that the National Maritime Museum has committed to make this work available to future generations by including it in its collections.’

The acquisition is included in the upcoming book A is for Atlas: Wonders of Maps and Mapping, published by the National Maritime Museum on Thursday May 19, 2022. 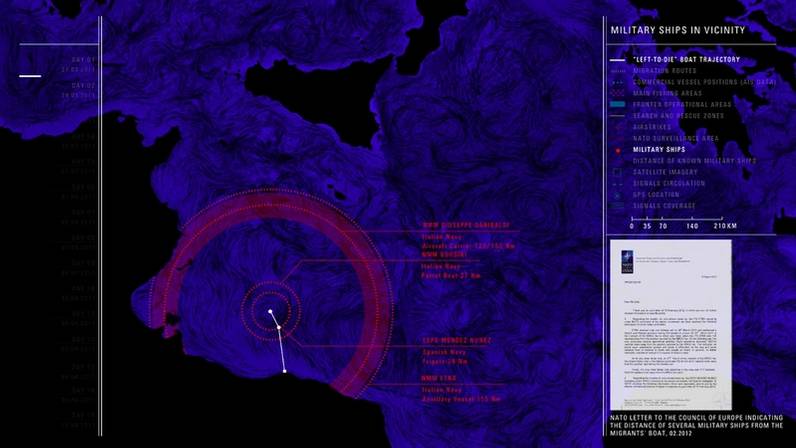 © Forensic Oceanography; licensed to the National Maritime Museum as part of the acquisition. Acquired with Art Fund support.

About the Author
Dr Megan Barford is Curator of Cartography at Royal Museums Greenwich. Their research has focused on nineteenth-century British Admiralty charts, charting and navigation, and twentieth-century map collecting. In 2017, they received an Art Fund New Collecting Award to build a collection of contemporary cartography concerned with forced migration.