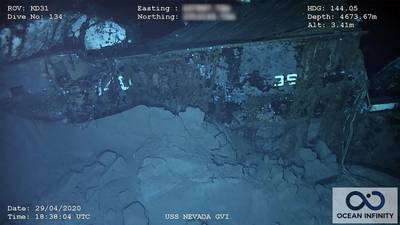 The stern of the wreck has the remains of “36” and “140.” Nevada’s designation was BB-36 and the 140 was painted on the structural “rib” at the ship’s stern for the atomic tests to facilitate post-blast damage reporting. (Photo: Ocean Infinity/SEARCH, Inc.)

The wreck of one of the U.S. Navy's longest serving battleships has been found 15,400 feet beneath the surface about 65 nautical miles southwest of Pearl Harbor, researchers said Monday.

The USS Nevada (BB-36), which served in two world wars over the course of a career that spanned more than three and a half decades, was discovered by underwater and terrestrial archaeology firm SEARCH, Inc. and marine robotics company Ocean Infinity at the bottom of the Pacific.

The mission was jointly coordinated between SEARCH's operations center and one of Ocean Infinity's vessels, Pacific Constructor. Pacific Constructor set sail for a range of commercial tasks in the Pacific in early 2020, ahead of the COVID-19 pandemic. As a result of the global health crisis, the ship has remained at sea on a range of taskings.

USS Nevada was launched in 1914, and performed escort duties for valuable convoys headed to the British Isles. At the end of WWI she escorted the ocean liner George Washington, carrying U.S. president Woodrow Wilson to attend The Paris Peace Conference. In WWII, on December 7, 1941 in the attack on Pearl Harbor, USS Nevada was the only battleship to get underway but, having been struck by five bombs, finally sank in nearby shallow waters. During this action 60 of her crew were killed and 109 wounded. Following salvage operations she soon re-joined the war effort, sailing to the United Kingdom to take part in the D-Day landings, amongst other European operations. She then sailed to the Pacific, arriving off Iwo Jima in February 1945 and played an important part in the invasion of Okinawa. After WWII, USS Nevada was assigned to be a target ship in the first Bikini atomic experiments in 1946, which she survived. Finally, in 1948 she was used as a gunnery practice target. Unable to be sunk by the ships using her as a target, she finally went down having been hit by an aerial torpedo on July 31, 1948. 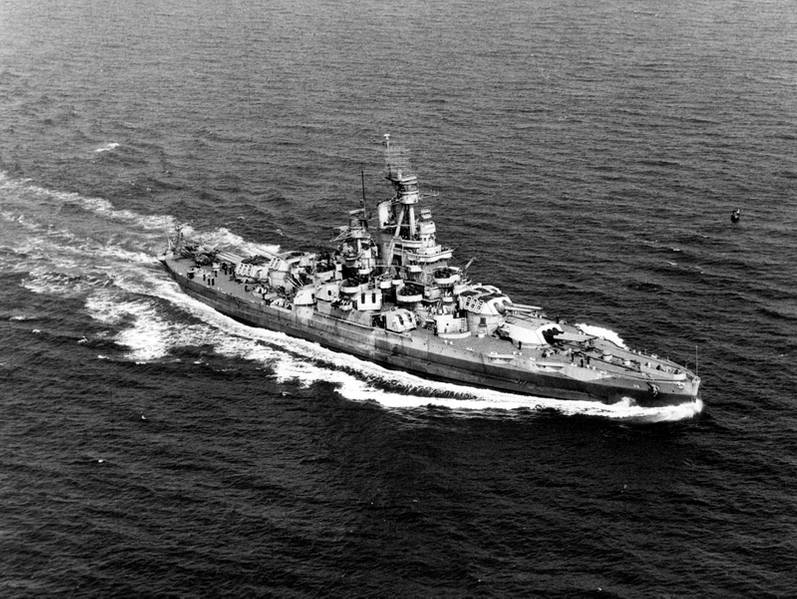 Dr. James Delgado, SEARCH's Senior Vice President and lead maritime archaeologist on the mission, said, "Nevada is an iconic ship that speaks to American resilience and stubbornness. Rising from its watery grave after being sunk at Pearl Harbor, it survived torpedoes, bombs, shells and two atomic blasts. The physical reality of the ship, resting in the darkness of the great museum of the sea, reminds us not only of past events, but of those who took up the challenge of defending the United States in two global wars. This is why we do ocean exploration to seek out these powerful connections to the past."

James Pochurek, SEARCH's President, said, "We are proud to have participated in this historic mission, which provides a tangible example of how technology can magnify the potential for discovery. Working with Ocean Infinity, the possibilities are limitless.

"The discovery of the USS Nevada is another reminder of the powerful human stories lying beneath the waves waiting to be re-told." 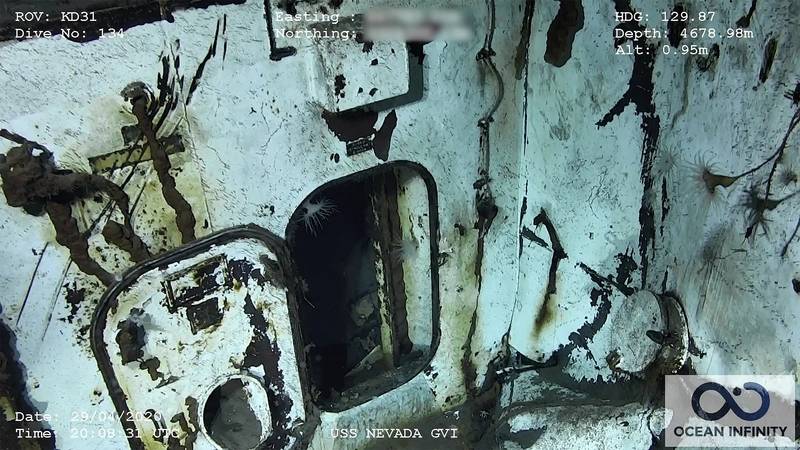 The engraving is on the exterior bulkhead above the hatch leading into a shell handling compartment for one of USS Nevada’s 5-inch/38 caliber guns. The first line of the inscription is the number of the door, the second is the designation of the compartment, and the third is the compartment number to which the door gives access. This remarkable level of preservation is occasionally found on deep-ocean shipwrecks due to the lack of light, oxygen, and the extreme cold at 15,400 feet down. (Photo: Ocean Infinity/SEARCH, Inc.)

Shawntel Johnson, Director of Search and Recovery at Ocean Infinity, said, "It has been a pleasure to work with the SEARCH team on this historically significant project. Our partnership has brought together a compliment of marine expertise through their extensive experience in marine archaeology and Ocean Infinity's leading, technology driven, search capabilities. We look forward to future collaborations between our companies. We would also like to recognize and say thank you to our crews offshore who have remained dedicated and committed through these uncertain times. We continue to value the work they do and the personal sacrifices they are making to keep us operational.

"It is our hope that by sharing the USS Nevada's story that it not only honors those who served in the Navy and fulfils an important educational role, but that in these challenging times it also serves as a symbol of perseverance and courage." 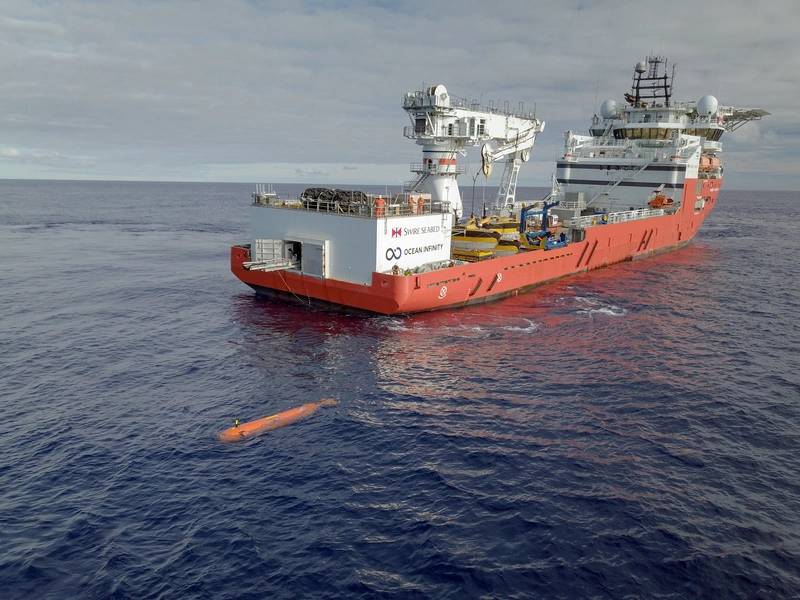 Launching an AUV from an Ocean Infinity vessel. Capable of working in the deepest, darkest, and coldest reaches of the ocean, AUVs return to the surface with data that provides a detailed sense of what sonar and other sensors have revealed.  (Photo: Ocean Infinity) 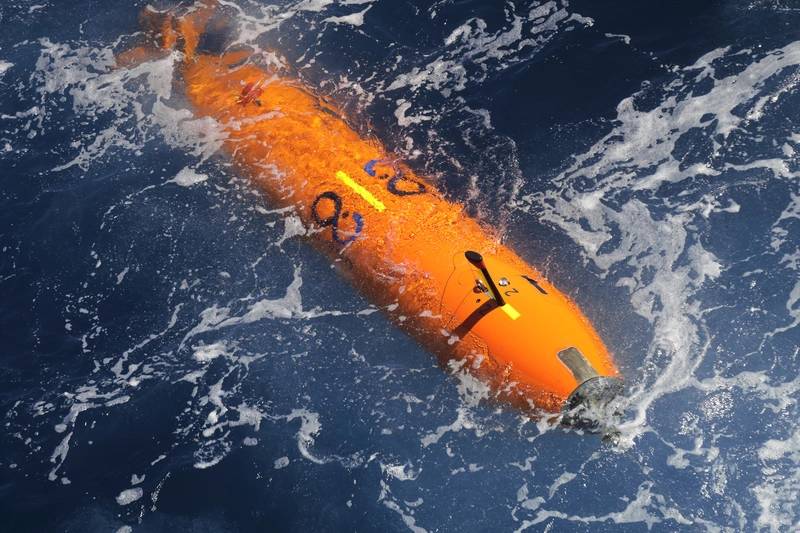 Ocean Infinity’s HUGIN AUV surveyed a hundred square mile area of the Pacific at a depth of nearly three miles to find the wreck of USS Nevada. (Photo: Ocean Infinity)

Retired Rear Admiral Samuel Cox, Director of the Naval History and Heritage Command, said, "We are greatly appreciative to Ocean Infinity and Search Inc. in relocating and providing information on an extremely historic vestige of our nation's past. Nevada is an unambiguous reminder of our Navy's heritage of resilience.

"Nevada has a proud place in Navy's history — commissioned in 1916, she served in both World Wars, and was present at the Pearl Harbor attacks in 1941; the only battleship to get underway after the attack. During the attack, the ship and crew sustained at least six, and possibly, as many as ten bomb hits and one torpedo hit, but remained in the fight. With our Sailors quick thinking, the crew grounded the ship, preventing her from sinking. The ship was repaired and immediately returned to the fight, proving the resiliency and toughness of our Sailors then, as are today.

"She went on to participate in numerous campaigns, earning a total seven battle stars for her actions during WWII. USS Nevada serves a reminder that our Sailors have a long, terrific tradition; her fighting spirit proved the U.S. Navy remains tough in difficult times. When the circumstances appear to be at their worst, our Navy remains at their best." 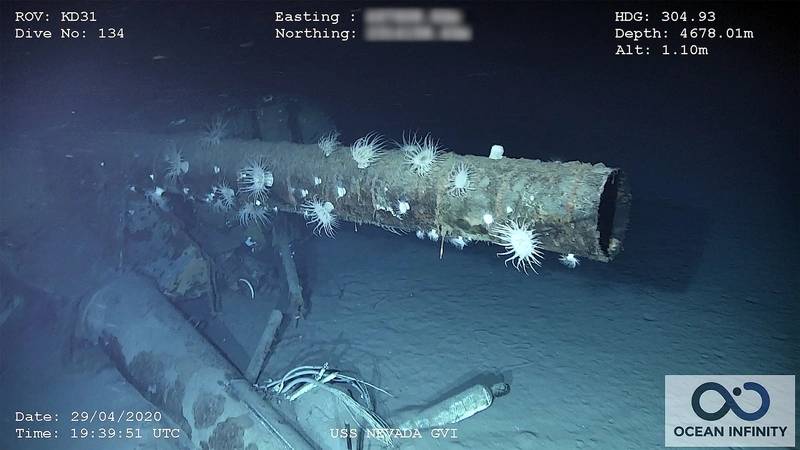 Like its sister battleships of the World War I/(early) World War II-era, Nevada’s superstructure was built around a towering steel tripod mast that supported the navigation and command centers, lookout stations, and radar. This is the top of the mast that once towered more than a hundred feet over Nevada’s deck. (Photo: Ocean Infinity/SEARCH, Inc.) 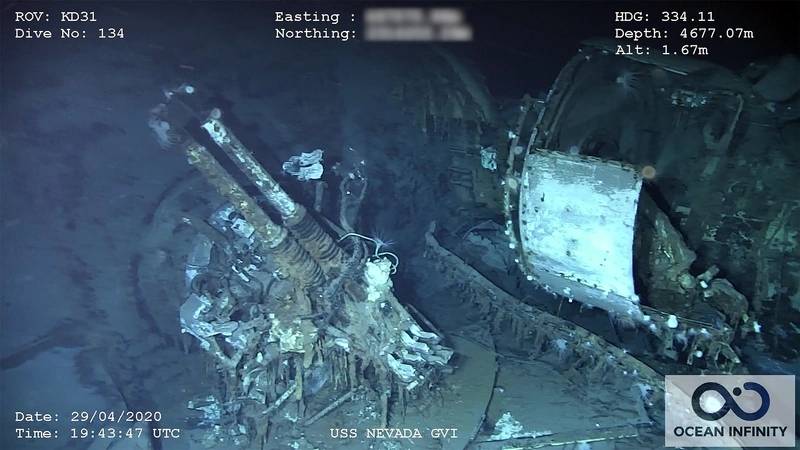 By the end of World War II, Nevada carried thirty-two 40mm Bofors antiaircraft guns. The airplane had changed naval warfare and guns like this helped the crew fight off enemy attacks from the air. This 40mm gun, still in its gun “tub,” is mounted next to a partly fallen, standard-issue Mark 51 “gun director” used by the crew to direct the fire of these guns. (Photo: Ocean Infinity/SEARCH, Inc.) 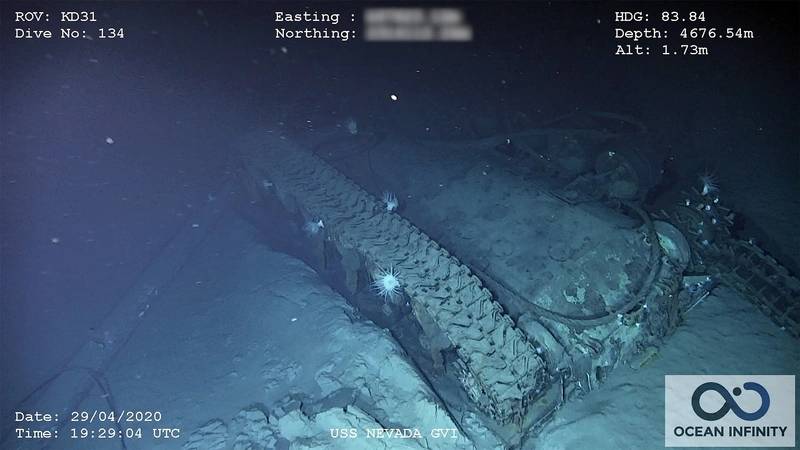 USS Nevada, like other ships at Bikini, was a floating platform for military equipment and instruments designed to see what the atomic bomb would do to them. One of four tanks placed on Nevada, this is either a Chaffee or Pershing tank that survived a 23-kiloton surface blast and a 20-kiloton underwater blast, and remained on Nevada until the ship was sunk off Hawai’i on July 31, 1948. (Photo: Ocean Infinity/SEARCH, Inc.)