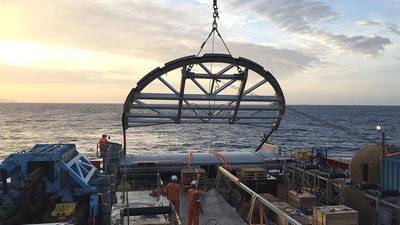 French cable company Nexans said that  it has been awarded a full turnkey contract worth more than $113m  for the manufacturing, delivery and installation of 350 kV HVDC submarine cable in the Philippines.

Nexans has been awarded a full turnkey contract for the submarine link of the Mindanao-Visayas Interconnection Project (MVIP) launched by National Grid Corporation of the Philippines (NGCP).

To optimise the delivery of the submarine cabling system for the MVIP to connect the three power grids of Luzon, Visayas, and Mindanao into one unified national grid, Nexans will leverage on its global manufacturing footprint.

The 350 kV submarine MI cable will be manufactured in Nexans' Nippon High Voltage Cable Corporation plant in Futtsu, Japan as well as in Nexans Norway plant in Halden. The installation and protection works at water depths up to 650 m will be performed by Nexans' own specialised cable laying vessel C/S Nexans Skagerrak.

"Nexans is delighted to once again be trusted by National Grid Corporation of the Philippines (NGCP), building on a number of projects the Group has successfully completed in the region," said Vincent Dessale, Senior Executive Vice President Nexans Subsea and Land Systems Business Group.

"Leveraging on Nexans' cutting-edge submarine cabling technology and our teams' deep water installation know-how, we look forward to contributing to the construction of a single national grid, which will provide a more reliable electricity transmission to the Philippine people," Vincent added.

With the completion of the MVIP, expected by 2020, NGCP aims to ensure a more stable and secure supply of power in the country and maximise the use of available local energy resources.