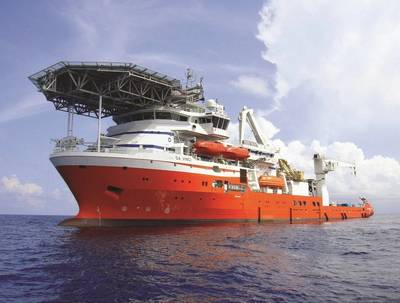 Subsea inspection, repair and maintenance (IRM) group Harkand says it is to position a second dive support vessel in the burgeoning North Sea sector after securing a major contract with CNR International (CNRI).

The award will see the state-of-the-art DP2 multi-purpose diving support vessel the Harkand Da Vinci relocate from South Africa where it was operating throughout 2013 under contract to national oil company PetroSA.

Harkand says the transfer of the vessel, which will undergo modification and upgrade work en route so it is ready for North Sea operations on arrival, reflects the rising demand for IRM and light construction services that they are experiencing in the UKCS.

"Harkand has performed extensive and varied subsea scopes over the years for CNR. We are delighted to extend our strong relationship with CNRI through the award of this campaign.  Having both the Da Vinci and its sister vessel the Atlantis operating in the North Sea will also provide our customers with the level of flexibility that they demand whilst positioning us for the next stage in building our business in the region," said David Kerr, managing director of Harkand Europe.

John Reed, Harkands chief executive officer, added: "We continue to see strong growth across our global operations and have a planned programme of investment in place to support our ambitions going forward."

"This includes expanding our fleet in Africa and the Middle East where preparations are ongoing to facilitate the potential addition of new vessels.  This will add critical mass to our portfolio of services and clients and allow us to sustain the foothold we established in the regions in 2013 and make it sustainable for the future."

About Harkand
Employing 1,000 people at bases in Aberdeen and London in the UK; Sharjah in the Middle East; Singapore and Perth in Asia Pacific; and Houston in the USA, the company says it aims to grow turnover to $1 billion in the next four years.

Tekmar Group will supply Cable Protection Systems (CPS) for the Dogger Bank C offshore wind farm in the UK, under a contract…