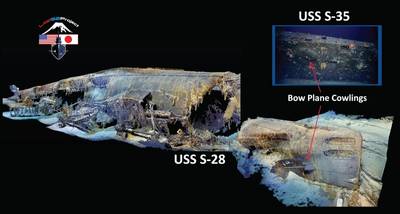 This is the 7th US WWII submarine found by Tiburon Subsea CEO Tim Taylor and his "Lost 52 Project" team. This recent discovery utilized pioneering robotics and methods at the forefront of today's underwater technology. The explorers applied a combination of autonomous underwater vehicles (AUV), remotely operated vehicles (ROV) and advanced 4D Modeling photogrammetry.

The USS S-35, built at the end of WWI, launched in 1919 and commissioned in 1922 was an active U.S. submarine until March of 1945 and was torpedoed as a target ship on April 4, 1946. During WWII the S-35 made seven war patrols in the Aleutian Islands of Alaska. Its mission was to intercept Japanese shipping and military assets that were threatening the Alaskan sea frontier. This region produces very cold temperatures, low visibility, dense fog, strong unpredictable currents, and poorly charted reefs and obstacles. The S-35 was awarded one battle star for its service in WWII.

"Currently seeing the underwater world in large swaths is done using sound or sonar. Human vision uses the visible light spectrum as the stimulus input and is extremely limited in range. Expanding this range underwater has presented unique barriers least of which is the public, based on documentary graphics, believes it already exists. This developing 4D technology is changing the way we can now explore the oceans. It is democratizing and empowering modern underwater exploration," Taylor said.

Although the S-35 did not go down in action, the discovery adds an important final chapter in the Lost 52 Projects 2017 discovery of the sister submarine USS S-28 with 49 sailors entombed. Verifying each submarine is an important part of the team's work. It was always known that there were two S-Class submarines recorded sank in the same geographical area. Until the S-35 discovery, the S-28's validation was accomplished by using schematic records to identify subtle differences in the construction of the bow plane cover cowlings. Finding the S-35 confirms with certainty the team's earlier discovery of the USS S-28.

The USS S-35 discovery is part of the ongoing "Lost 52 Project" supported in part by STEP Ventures and has been recognized by JAMSTEC (Japan Agency for Marine-Earth Science and Technology) as the first and most comprehensive offshore underwater archaeological expedition in Japanese waters.