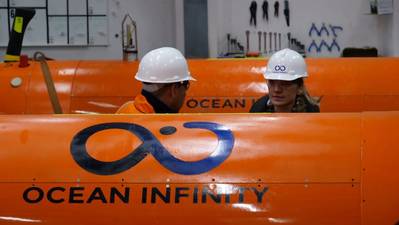 U.S. based Ocean Infinity said it has been awarded a contract from the Government of South Korea to search for the wreckage of lost bulk carrier Stellar Daisy, which sank on on March 31, 2017, with 24 people on board.

The Stellar Daisy was transporting iron ore from Brazil to China when it was lost in the South Atlantic Ocean, approximately 2,500 nautical miles due east of Uruguay.

The company's CEO, Oliver Plunkett, said, “For the sake of all involved we sincerely hope that we can find Stellar Daisy and be able to collect as much evidence about her loss as we can. As always with deep sea search there can be no guarantee of success as neither the precise location nor the specific circumstances of her loss are known.”

Ocean Infinity’s AUVs are equipped with a side scan sonar, a multi-beam echo-sounder, a sub-bottom profiler, an HD camera, a conductivity / temperature / depth sensor, a self-compensating magnetometer, a synthetic aperture sonar and a turbidity sensor. The fleet is capable of operating in water depths from 5 meters to 6,000 meters.

Upon locating the wreck, the company said an extensive survey will be carried out using the latest 3D imaging technology.