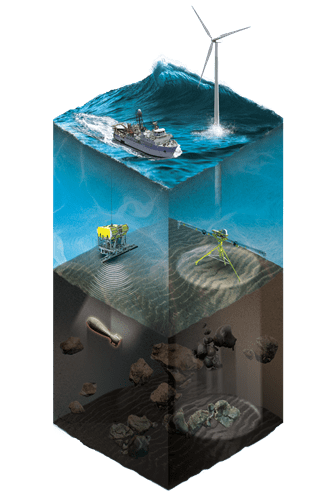 The new $3.4 million project will run through to March 2023 and will see PanGeo work with Cellula Robotics of British Columbia and the Marine Institute of Memorial University of Newfoundland to reconfigure the Acoustic Corer 3D technology to allow for a wider area scan and the ability to image geohazards to depths greater than 30 meters sub-seabed. In addition to providing wider area scans, PanGeo will incorporate new Artificial Intelligence (AI) processing technology to improve data acquisition and accelerate data processing. Ultimately this technology will lead to a reduction of personnel offshore and improved vessel efficiencies in support of Canada’s net zero reduction targets for 2050, Kraken said.

PanGeo’s wide-area GeoScan (see Figure 1) will interrogate for sub-seabed hazards and support efforts in de-risking offshore wind, oil and gas, and other offshore installations. As the offshore wind farm sector grows and matures, foundations are getting bigger with more power generation per turbine. Turbine capacity has increased from 1.5 GW to now 14 GW which has driven the size of monopile foundations from 5 meters to 10- to 12-meter diameters, thereby creating the market pull for wider area scanning requirement. According to Kraken, solutions provided by the GeoScan will contribute to de-risking foundation installations by imaging and identifying geohazards allowing prime contractors to microsite pile locations and reduce costly pile refusals.

TechnipFMC, a company best known for its offshore oilfield services and equipment, is looking to diversify its offering and…