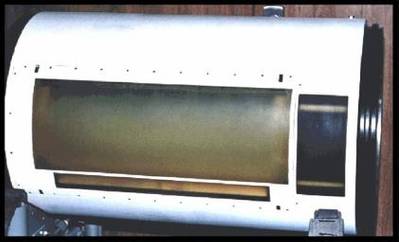 In 2009, The US Navy announced that it would begin providing recently-developed underwater detection equipment to Canadian authorities to assist in the search and recovery operations of Swissair Flight 111 near Halifax, Nova Scotia, Canada. The equipment, known as the Synthetic Aperture Sonar and the Laser Electro-Optics Identification System, were both used to provide detailed images of the ocean floor and will be used to map the debris field. These systems are part of an equipment suite the U.S. Navy's Coastal Systems Station, Panama City, Fla., has developed to hunt underwater mines.
"This is the latest technology in electro-optics laser systems,” according to Program Project Officer Cmdr. Spence Whitten, Office of Naval Research in Washington D.C.  “In fact, the system is still in the research and development phase. The system should provide searchers with the best resolution available today in locating underwater objects."
The synthetic aperture sonar is a dual frequency model. The high frequency mode can distinguish between a barrel and an automobile tire, while the low frequency mode allows the sonar to detect objects just beneath the surface of the ocean floor. The laser line scan sonar uses a laser to illuminate the target and "take a picture" in the same way that a camera uses a flash. Its narrow beam allows images to be acquired a distances three to four times that possible with conventional imaging systems.
Cmdr. Whitten and 16 scientists and engineers from the Navy's Coastal Systems Station accompanying and operating the equipment when it arrives in Canada. The system consists of more than 54,000 lbs. of gear and requires two U.S. Air Force C-17s to carry it and its accompanying personnel to Halifax.
Marine Technology Reporter has been commissioned to publish the Official “Oceanology International 50th Anniversary Edition” which will distribute with the MARCH 2020 edition of MTR. For information on advertising in this edition, contact Rob Howard @ howard@marinelink.com, t: +1 561-732-4368; or Mike Kozlowski @ kozlowski@marinelink.com, +1-561-733-2477.
• Canada • Florida • Mike Kozlowski