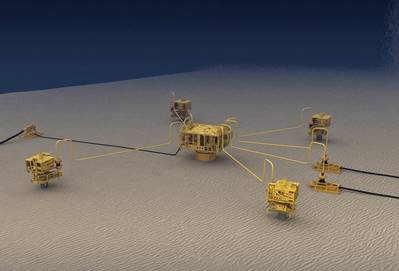 Oilfield services company Schlumberger announced Thursday that its subsea arm has received a contract from Chevron to provide an integrated subsea production and multiphase boosting system for the deepwater Anchor field in the US Gulf of Mexico.

OneSubsea will also deliver production manifolds and an integrated manifold multiphase pump station rated to 16,500 psi, subsea controls and distribution, according to Schlumberger, who revealed today that the contract was awarded back in March.

Chevron, as operator with a 62.86% stake in the Anchor project, announced the final investment decision (FID) for the $5.7 billion ultra-high pressure deepwater development earlier today. Its partner Total holds the remaining 37.14% working interest in the project.

The first phase will encompass a seven-well subsea development tied to a semisubmersible floating production unit (FPU) with planned design capacity of 75,000 barrels of crude oil and 28 million cubic feet of natural gas per day. First oil is expected in 2024.

Justin Rostant, an analyst with Wood Mackenzie’s Gulf of Mexico team, expects that the Anchor FID will “kickstart the next wave of investments in US Gulf of Mexico.”

“Anchor is the first of three 20,000 psi projects that Wood Mackenzie expects to reach FID within the next 18 months,” he said.

“We estimate that these three projects combined hold approximately 1 billion barrels of oil equivalent in reserves and will require over $10 billion of capital investments.”