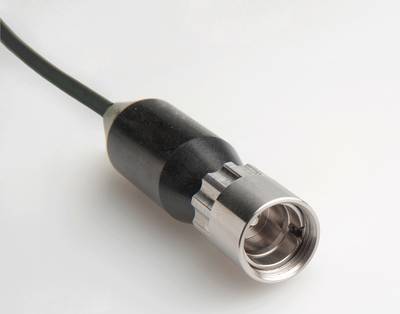 The MacArtney Underwater Technology Group introduced the OptoLink Single Fiber Connector, a small sized but significant addition to MacArtney’s OptoLink fiber optic connector range. Designed for subsea equipment manufacturers, the low insertion loss and back reflection make this connector suited for high speed data and video transmission. The rugged stainless steel design warrants the robustness and reliability of the connector, whether mounted on the deck of a vessel under harsh sea conditions, on an offshore platform, or at full ocean depth.
In step with the trend toward smaller equipment, the new addition to the OptoLink range has been developed to offer reliable and efficient fiber optic connectivity in a minimal sized connector. Especially in proportion to the fact that (as a standard) the OptoLink Single Fiber Connector features a full ocean depth rating of 6000m - the connector is very compact.  In addition, the OptoLink Singe Fiber Connector is engineered for minimal weight. In practice, this entails that the connector applies a minimum amount of strain on for instance small and medium sized ROV’s, thus allowing them to carry more equipment.  The single fiber (single pass) OptoLink connector is available in a bulkhead (BCR) and cable mount (CCP) configuration with minimal attenuation between the mated connector pairs. Furthermore, it is available in both single and multi mode. The connectors have SS316 stainless steel housing as standard, however, other shell materials are available upon request.
www.macartney.com


(As published in the November/December 2012 edition of Marine Technology Reporter - www.marinetechnologiesnews.com)