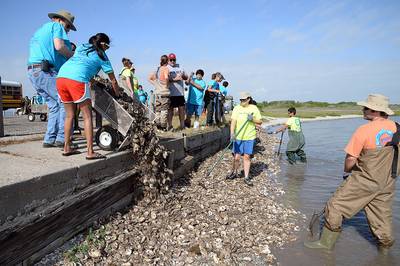 The settlement of the Deepwater Horizon oil spill fines — the largest pollution penalty in history — will bring an unprecedented opportunity to spend billions of dollars on restoration projects in the Gulf of Mexico region.

But new research by Harte Research Institute for Gulf of Mexico Studies graduate Dr. Brittany Blomberg has found that the fate remains unknown of hundreds of previous oyster reef restoration projects performed around the United States, an investment of more than $45 million and thousands of hours of labor.

“Brittany’s research has exposed a flaw in oyster restoration efforts that I am afraid may extend to all habitat restoration. I hope that is not the case, especially now that we are on the verge of the largest restoration effort ever for the Gulf of Mexico,” said Dr. Larry McKinney, Executive Director of the Harte Research Institute for Gulf of Mexico Studies at Texas A&M University-Corpus Christi. “If we are not adequately monitoring projects and providing that information to managers and funders, how can we make sure we are investing billions of dollars wisely? The answer is, we cannot and that is an answer we literally cannot afford.”

Blomberg’s dissertation, “Evaluating the Success of Oyster Reef Restoration,” queried the National Estuaries Restoration Inventory, a database established with the 2000 Estuary Restoration Act (ERA). The act made the nationwide restoration of degraded marine habitats a priority and required the tracking and dissemination of data related to those projects. Blomberg’s work was honored with the Texas A&M University-Corpus Christi’s 2016 Outstanding Doctoral Student Award.

Oyster reefs, once dominant habitats in estuaries worldwide, have experienced greater losses than any other marine habitat. It’s estimated that 90 percent of oyster reef habitats have been lost, compared to historic abundance, Blomberg said. In the Gulf of Mexico, oyster habitat losses number anywhere from 50 to 80 percent. Because of this loss and the many benefits potential benefits oyster reefs offer, oyster reef restoration has become an increasingly popular coastal project.

In addition, as filter feeders, oysters remove excess phytoplankton and nutrients to help clean the water column. That helps prevent harmful algal blooms and a form of water pollution known as eutrophication, which can cause hypoxia (areas of low-to-no oxygen in the water) that can be harmful to marine life. Clearer water also promotes sea grass growth.

Oyster reefs also help prevent coastal erosion by buffering storm surge and wave energy that can eat away marsh, sandy beaches and coastal developments such as homes and roads.

While the popularity of oyster reef restoration has grown, there are questions about both the effectiveness and cost that can only be answered by studying past projects, Blomberg said. For example, when work requires the mobilization of large equipment like barges, how much reef should you build to ensure the project is cost-effective? Do the environmental benefits of restored oyster reefs, like shoreline stabilization and water filtration, scale with the size of the reefs?

“If we build a small reef and our goal is to reduce the amount of nutrients in the bay, it’s hard to say what the effect of that one small reef will be,” Blomberg said. “That’s why it’s important to monitor and measure these projects so we can provide a quantitative value of what each reef is providing, and data dissemination is critical to get a cumulative picture of the many, often relatively small, restoration efforts.”

The Estuary Restoration Act was one of the first large restoration-funding acts, Blomberg said. Without a central clearing house of monitoring data, it’s hard to learn how that money was spent. Most data is disseminated through single publications or, if the project was conducted by a state agency or nonprofit, maybe not published at all, providing an incomplete picture of overall restoration progress.

“This is a huge restoration opportunity and its biggest impact will be in the Gulf. But the data and knowledge we can gain through these RESTORE funds and their application in the Gulf can easily transfer to locations around the world,” Blomberg said. “It’s important for the restoration community as a whole to be invested in how these projects are being implemented, how the data is being managed and how that information will ultimately be used.”