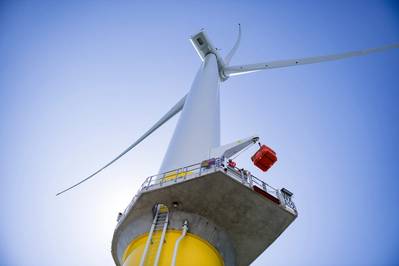 Offshore wind currently represents just a small piece of the world’s energy supply. But that’s changing faster than ever before as new and existing players look to tap the huge resource potential—and market opportunities—being unlocked by shrinking costs and technological advances, as outlined in a recent comprehensive market report.

In the coming two decades, the rapidly maturing offshore wind market is expected to become a trillion-dollar business as the pace of installed capacity growth accelerates, according to World Energy Reports’ (WER) Outlook for Offshore Wind Power: The Frontier of Future Energy, published in June.

A free webinar will present the report’s key findings on June 17. Sign up here.

Growing, with huge potential
Globally, the total installed energy capacity for both onshore and offshore wind farms at the end of 2019 totaled 651 gigawatts (GW), or about 10% of global electricity generating capacity, according to the WER report. While just 25.5 GW, or less than 0.5%, of that installed capacity is currently located at sea, the rate of new installations offshore has been growing at a much faster rate since 2010: 26% compound annual growth rate (CAGR) compared to 14% for onshore. Even amid the current coronavirus pandemic, WER expects this trend to continue, with 16 GW of additional offshore capacity to be added in 2020 and 2021, driven primarily by ongoing activity in the well-established Northern European sector as well as the newer, fast-growing Chinese market. China, already the leader onshore, emerged as a major offshore wind player in 2018 and has continued to expand its substantial project pipeline.

When comparing onshore wind vs. offshore in terms of untapped potential, it’s clear that offshore is simply unmatched. The WER report estimates global offshore wind potential to be technically capable of supporting more than 120,000 GW of electricity production capacity (equating to approximately 420,000 TWh), which is more than 20 times greater than current world demand.

By 2040, WER forecasts offshore wind capacity will increase to somewhere in the range of 340 GW-560 GW, led by Europe and China, with newer entrants the U.S., Japan, South Korean and India among top markets. The report identifies some 500 GW of projects and development zones currently in the planning and development stages, mainly coming from Europe, Asia and the U.S. Details for each project are laid out in the report as well as in a corresponding online database.

Lower costs
Offshore wind farms are not new; they have been around for decades. So why is offshore wind taking off faster now than ever before? WER’s report points to a combination of factors helping to grow offshore wind’s role in the word energy mix. The simplest but most important reason for growth is that offshore wind has made great strides over recent years to become increasingly cost competitive compared to other energy sources, including fossil fuels. In the years ahead this momentum will only build as costs continue to fall.

The growing volume and size of offshore wind projects, along with improving supply chain competencies larger, more efficient turbines (the current largest is 14 megawatts (MW)), and the utilization of offshore transmission substation hubs have all helped to reduce offshore wind’s levelized cost of energy (LCOE). According to WER, LCOE has declined from a global average $170/MWh in 2010 to strike prices of $60/MWh to $110/MWh in 2016 to 2018 European and U.S. auctions. Recent prices have been seen as low as $47/MWh in recent European auctions. WER says declining LCOE is allowing offshore wind to compete with fossil fuel projects in European and Chinese markets. It’s still a different story in the U.S., but WER sees cost parity by the end of next decade. Today, installation capital expenditure (capex) cost for bottom-fixed turbine projects averages just over $3,000 per kilowatt (KW) with transmission. WER projects this will fall to fall to $2,500/KW by 2030 and $1,900/KW by 2040.

Floating future
Another significant factor leading to a major jump in projected installed capacity over the coming years is the advancement and commercial demonstration of floating offshore wind turbines, which open up new areas to exploit: specifically, in deeper waters where the construction of wind farms was not previously feasible. Currently almost all offshore wind power generation comes from bottom-fixed turbines, which are restricted to water depths of about 60 meters or less. However, as concepts continue to evolve and become proven, floating turbines will enable wind farm construction in deeper waters that hold some 80% of the world’s wind capacity potential. Representing another boost for overall capacity potential, these areas are typically further from shore where the wind generally blows stronger, resulting in higher turbine capacity factors.

Today’s most proven floating wind turbines are Equinor’s Hywind, employed on the 88 MW Tampen project, and Principle Power’s WindFloat, being used on the 50 MW Kincardine project, but WER’s report looks at more than 50 floating wind concepts in various stages that are being studied across the globe. Just as is occurring for traditional fixed-base turbine projects, the increasing size of floating projects and the industrialization of the hull construction process is helping certain concepts reduce project LCOE. For example, as Equinor matures the technology, it aims to bring the LCOE of Hywind projects to €40 -60/MWh by 2030.

A pipeline of more than 50 GW of floating capacity requiring $93 billion to $148 billion of capex investment has been identified by WER. As is the case in the bottom-fixed segment, the U.K. presently has the largest floating pipeline at more than 25 GW, followed by Norway (more than 5 GW) and Japan, the U.S., South Korea, Ireland, France and Taiwan, each with multi-GW pipelines. WER’s report highlights the development of a much large pipeline after the middle of this decade, with potential zones discussed in the U.S., Japan, Norway, U.K. and France.

Big potential means big opportunities
Forecasted near- and long-term increased activity bodes very well for the global supply chain. WER expects offshore wind projects will require between $1 trillion and $1.5 trillion of capex over the next two decades. Much is still on the table for the gamut of suppliers and marine services firms, as 80% of offshore wind projects detailed in the report and database are still in early stages of planning and development.

With a pipeline of activity so large, there’s plenty of work to be had by existing players and new entrants alike. We’ve already seen a number of traditional offshore oil and gas players—from operators such as Shell, Total, Equinor and Repsol, all the way down the supply chain—transfer their skillset into the offshore wind market over the years. For these firms and others, including traditional offshore oil and gas players such as yards for jacket and HVDC substation fabrication, as well as for construction and assembly of floating foundations, opportunities abound as projects get larger, deeper and further from shore.

Offshore wind farms need servicing, creating even more work for a wide range of support providers—from boatbuilders to turbine technicians. In Europe, for example, onshore operation support bases are having associated positive impacts (long-term direct jobs, and bolstered local supply chains) in port regions that had been historically active but have struggled more recently due depressed oil and gas and shipping markets. Using the current UK $94,000/MW/year operational expenditure (opex) cost, the current pipeline of projects could require up to $46.6 billion of annual opex spend within the next decade, says WER.