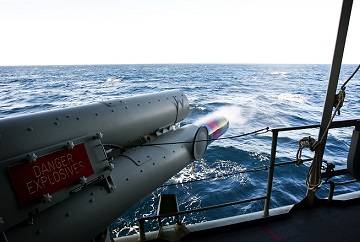 ANZAC Class Frigate HMAS Stuart fired the explosive warhead against a specially designed target in the East Australian Exercise Area.  The successful firing was the final milestone before the torpedo is accepted for operational service across the fleet.

“The MU90 Lightweight Torpedo has already completed an extensive test program using exercise (non explosive) variants. This firing is the final Test and Evaluation event for the MU90 and demonstrates the full capability of the torpedo,” Vice Admiral Griggs said.

The torpedo was assembled and prepared at the Torpedo Maintenance Facility at HMAS Stirling in Western Australia and Navy personnel onboard the firing ship handled, loaded and fired the MU90 torpedo.

The target for the firing was specially constructed in Victoria by the Defense Science and Technology Organization and it was successfully attacked by the torpedo. The target complied with all appropriate environmental requirements.

“The weapon provides the RAN with one of the most capable lightweight submarine torpedoes in the world.”

The MU90 Lightweight ASW Torpedo is three meters long, weighs 300 kilograms, has a range of greater than 10 kilometers and is designed to detect and attack deep quiet-running submarines.

“Delivery of this important defense capability is due to the combined and concerted efforts of DMO, Navy, and defense industry to remediate the MU90 Lightweight Torpedo Replacement which was removed from the Projects of Concern list in November 2012,” Mr. King said.

Kraken Robotics  has secured a $1.1 million purchase order from an unnamed customer for several of its AquaPix synthetic aperture sonars SAS).