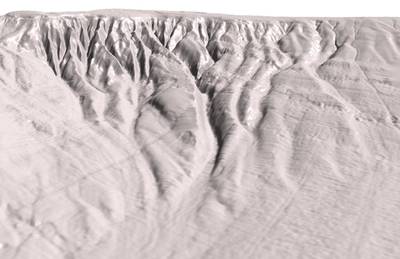 A scientific study describes for the first time the submarine cartography of a high-latitude system in a channel covers tens of kilometers in the northern western area of the Barents Sea, in the Arctic Ocean. The Interfan Bear Island and Storfjorden (IBIS) channel is one of the few submarine valleys in polar latitudes that kept its geological architecture during the Last Glacial Maximum (LGM), according to the new study published in the journal Arktos – The Journal of Arctic Geosciences.

Terra incognita: discovering the planet’s sea floors
Many unknown landscapes in our planet are under oceanic waters. Nowadays, sea floors and polar regions build up two big frontiers for research in the field of Earth Sciences. In this context, the application of advanced technologies in scientific campaigns – differential GPS, high resolution multibeam bathymetry, 2D and 3D reflection seismic imaging, remotely operated underwater vehicle (ROV) – was a methodological revolution that broadened the precision of bathymetry maps in sea floors.

The INBIS channel is located in the northern western side of the Barents Sea, in Bear Island, in the Norwegian archipelago of Svalbard Islands. Its head is located in the continental shelf, about 500 meters deep, and its furthest part extends to 2,500 meters below the marine surface. INBIS is regarded as “an exceptional deep marine channel in polar latitudes, which was formed in an area of the continental margin between two important trough mouth fans (TMFs),” said José Luis Casamor, member of the Consolidated Research Group on Marine Geosciences of the Faculty of Earth Sciences of the University of Barcelona and co-director of the oceanographic campaign DEGLABAR, which mapped great part of the INBIS channel in the oceanographic ship OGS Explora in 2015.

Over thousands of years, the submarine relief of this channel has been shaped by the action of several geological processes in polar margins. The gullies are the main topographic structures “that enabled the geological reconstruction of INBIS channel,” noted Leonardo Rui, member of the Trieste National Institute of Oceanography and Experimental Geophysics (OGS) and first author of the study.

“In particular,” Rui continued, “the structure and some traits of these formations –for instance, ratio between dimensions and incision depth- help understanding the possible formation mechanisms and the differentiation between gully-dominated areas from channel-dominated areas.”

A submarine topography preserved during the Last Glacial Maximum (LGM)
In general, the sediment brought by ice streams prevent gullies and other relief from being formed in these submarine areas. In the INBIS channel, its proximity to the Bear Island was a determining factor to stop the advancing of the ice streams and preventing the submarine valley from being recovered with sediments.

“As a result, this submarine valley is one of the few polar channels that kept its special submarine relief during the LGM, the period of maximum extension of the ice caps in the most recent history of geology in the planet, more than 20,000 years ago,” said Casamor, member of the Department of Earth and Ocean Dynamics of the UB.

Turbidity currents shaping the submarine landscape
In the upper part of the INBIS channel, the new bathymetric map describes a system of gullies and minor channels – among which are the TMFs of Kveithola and Bear Island – that cut the continental slope and end up running into the main channel. According to the study, the action of density currents and turbidity currents created by fusion ice water are factors that shaped and kept these erosive structures.

In this geological context, “and particularly the period of maximum expansion of the ice cape in the area during the LGM, the material brought by ice currents powered the formation of TMFs,” Casamor said.

The change in the slope gradient is another key factor for the submarine topography that has to be considered when determining the origins of the submarine relief of the IBIS channel. According to Rui, “this factor, together with changes in dimensions of gullies, led to a distinction of an area partially subjected to the flow of glacigenic debris flow (southern area) and a fully protected area by the proximity to the Bear Island (northern area).”

As part of the study, which also included participation from experts at the University of Tromsø (Norway), among other institutions, erosive structures in the most southern area were mapped, “which suggest the presence of relict mass transport deposits (MTD) crossing the upper slope with a SE-NW orientation,” Rui said.

The morphological analysis of the furthest area “could suggest some of these instability episodes of oceanic floors, although it is necessary to continue doing more detailed research,” Casamor said.

Arctic: the domains of great ice currents
The geological history of the Arctic Ocean revealed extreme episodes such as the Storegga Tsumani, the most spectacular submarine disaster known so far, which shook polar sea floors about 7,000 years ago. In the Fram Strait – a passage between Greenland and the Svalbard Islands – the Arctic cold waters mix with the Atlantic warm waters and create an exceptional situation to study the geological records of the natural climate change in the planet.

Now, the northern polar waters – one of the most affected ecosystems by the effects of global change  – build a perfect natural laboratory for many fields of marine geosciences (geomorphology, paleoceanography, paleoclimatology, bathymetry, etc.). In this scenario of challenges for international sciences, the Consolidated Research Group on Marine Geosciences of the UB led by Professor Miquel Canals has been distinguished for its research studies’ scientific impact, focused on revealing the geological and paleoclimate history of marine seafloors, which have been dominated by the action of great caps and ice currents for thousands of years.

Antarctica, the world’s last true wilderness, has been protected by an international treaty for the last 60 years. But the…