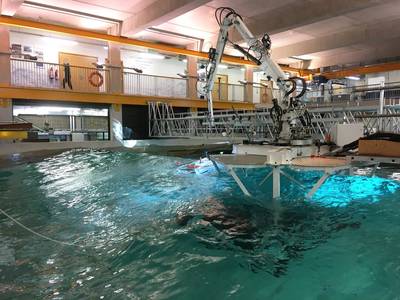 STL’s Autonomous Synchronised Stabilised Platform being put through its paces at the University of Plymouth’s COAST Laboratory. Photo courtesy STL

With a background in subsea and offshore, coming up with new ideas is the norm’ for UK-based engineering consultancy STL (Submarine Technology Limited), writes Elaine Maslin.

The last few years have been no different. The company has been focusing on ship-based robotics, including robotic arms. These aren’t just any robotic arms – they’re motion compensated systems for deploying/recovering people and robots to and from fixed or moving objects. That could be wind technicians to an offshore wind turbine or an autonomous underwater vehicle (AUV) in and out of the water – all with a single arm system from a vessel.

In fact, STL has developed two different systems, one for moving people to locations up to 20m above the sea surface and another, an articulated system, for launch and recovery of remotely operated vehicles (ROVs) and AUVs, using a remote sensing system.

Andreas Fechs, project and business development manager at STL, explained both systems at the joint Society of Underwater Technology (SUT), IMCA and Hydrographic Society Scotland seminar in Aberdeen in mid-November.

A key goal has been to improve the safety of and ability to access offshore structures, initially fixed structures, from ships, including those that are relatively smaller than current gangway-system based vessels, he says. But another goal is to give future uncrewed surface vessels (USVs) more capability.

It’s been a challenge STL has been looking into since the early 2010s, when the need for better access systems became an issue, for offshore wind, but also normally unattended oil and gas facilities. While others have now commercially introduced gangway systems, STL has been developing “space stabilisation” and “synchronous stabilisation”. Its first concept, Neptune, got going in 2012, with government R&D funding.

The Neptune a two-part articulated arm that has been designed to be able to carry 3-4 people or 1,000 tonne of equipment up to a height of 20m above the seabed and 20m reach, with +-10cm station keeping accuracy.

It weighs 12-tonne, with a 2.5m x 3m foundation footprint, and is based on a steel truss structure, “For lightness and stiffness, as they have to be mounted on to relatively small vessels, but reach up to 20m high and be moved relatively quickly,” explains Andreas, allowing the system to be installed on a 36m catamaran or a 54m-long monohull.

All joints, the slew-ring and the gimbal base are moved with hydraulic cylinders or motors (the HPU isn’t part of the 12 tonne), because of the need for speed and accuracy, using a computer control system – software and hardware at the heart of the system – that takes in the vessel’s six degrees of movement (via an IMU and GNSS), including up to 3m significant wave height. The Neptune system uses dual, high speed CAN networks for rapid data transfer between sensors, controllers and actuators.  This enables full motion compensation and station keeping accuracy.

The company has developed a full-scale prototype, first tested onshore in 2017, both on a six degree of freedom ship-motion simulator STL has and on land at STL’s research facility in Cowes on the Isle of Wight, using real vessel motion data as input. Andreas says a vessel-based trial of this system was planned before the end of 2022. 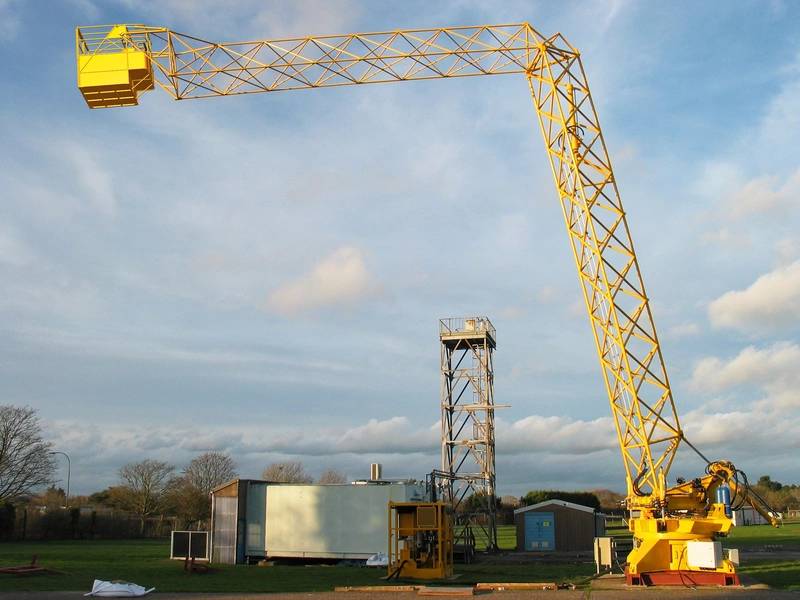 Having developed Neptune, STL decided to take the concept further. Why not a multi-axis articulated arm with more intelligence, so that USVs could do more, such as equipment transfers, survey and inspection or launch and recovery operations, from a moving object, i.e. a ship or USV, to another moving object?
This is the synchronous stabilisation the company has been working on, or its Autonomous Synchronised Stabilised Platform (ASSP), that’s had European Regional Development Fund through the Marine-I programme in Cornwall, where the company has another base. It adds machine vision to synchronise the payload motion with the moving target, so that, whatever motion the articulated arm is experiencing, the end of the arm has no residual motion with regard to the moving (floating) object it’s synchronising with.

This could be used from ships for launch and recovery of ROVs and AUVs, says Andreas. Using a remote sensing system (RSS), developed by STL, and machine vision to detect robots in the water, the arm, from a host vessel, could be used to pick them out of the water, tho this would need a latching system added to the vehicles, he says.

A critical part of this system is a “Remote Sensing System” (RSS), which STL had further Marine-I funding to develop. The RSS adds machine vision to the robotic control system, enabling the movement of objects of interest to be tracked relative to a known datum. This is fed into the control system so the arm can synchronise with the object, such as an AUV, ROV, another vessel or a floating wind turbine, says STL.

The system was initially tested in 2020 using a ship-motion simulator and a moving target test rig, and since then there’s been a demonstration at the University of Plymouth’s COAST Laboratory, which has in-water testing enabling physical model testing with combined waves, currents and wind. This involved a research prototype with a three-part articulated arm. It was limited to a 100kg payload, which would support deployment of a Falcon ROV or Gavia AUV, says Andreas. “But it would be applied to any robotic crane arm,” says Andreas. “It could allow ship-to-ship transfer. The geometry can be adapted to any application and heavy objects.” I.e. the technology can also be applied to a bigger system such as Neptune, says STL.

There’s still work to be done. The machine vision for remote sensing will need to be at a point where adequate robustness and reliability offshore is demonstrated.

Iberdrola to Install its First-ever Floating Solar Plant in Brazil