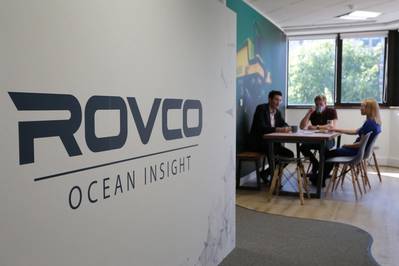 The funding includes a £3.9 million ($5.1 million) Series A investment from Foresight group via the Foresight Williams Technology EIS Fund and Foresight VCTs as part of a larger round including funds from existing shareholders.

Formed in 2015, Rovco has invested  heavily in the development of an AI driven data platform and live 3D vision systems for subsea robotics.

Utilizing its SubSLAM technology, Rovco has carried out many subsea projects across the renewables and oil and gas industries globally. In 2019 the company marked a milestone, investing heavily into research and development to create a world-first in subsea 3D Live-Streaming to propel the business forward.

Brian Allen, CEO and founder of Rovco, said, “2019 was an incredible year for Rovco. We had a hugely successful period when we saw several project and contract wins creating secured current and forward revenue of more than £10 million ($13 million). We are now setting our sights on a new major base in Scotland along with new offices for the USA and Asia markets.”

Leading the round, the Foresight Williams Technology EIS Fund invests into early-stage, unquoted companies that are developing technology and pioneering innovations.

Andrew Bloxam, Investment Manager at Foresight, said, “Rovco has developed technology offering game-changing improvements in an industry that really needs it. It is a large international market and Rovco has already generated early interest from some prominent customers, which hints at a substantial opportunity, and we are delighted to be able to support the team as they seek to capitalize.”

Matthew Burke, Head of Technology Ventures at Williams Advanced Engineering, said, “We are proud to back Rovco whose pioneering SubSLAM camera technology has the potential to transform productivity in subsea surveying. I am confident that Williams’ expertise in design, development and manufacture will help to accelerate the commercialization of the SubSLAM camera system.”