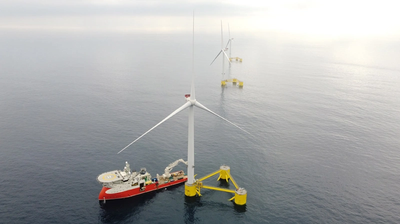 Martin Neubert, Deputy Group CEO and Chief Commercial Officer at Ørsted, said: "We’re excited to join forces with Repsol to explore floating offshore wind development in Spain and to reaffirm our commitment to driving the commercialization of this technology, which will extend the reach of offshore wind by enabling installations further offshore and in deeper waters.”

João Costeira, Executive Director of Low Carbon Generation at Repsol added: "Having Ørsted, the world leader in offshore wind, as a partner positions us to be relevant in the future development of the floating technology, with which we already have experience thanks to our involvement in the Windfloat Atlantic project off the coast of Portugal.”

Rasmus Errboe, Head of Region Continental Europe at Ørsted, says: “Spain has one of the world’s largest fleets of onshore wind and solar PV farms, and by the end of this decade Spain will also be producing green energy at scale from floating offshore wind farms. We look very much forward to working with Repsol, the country’s leading energy provider, to help accelerate Spain’s transition to renewable energy while creating local jobs and investing in the Spanish supply chain.”

Renewable power generation is one of the pillars of Repsol's decarbonization strategy. Repsol recently increased its installed capacity targets for 2030 to 20 GW, an increase of 60% compared to the previous target.

By 2025, installed capacity will increase to 6 GW. In October 2021, Repsol increased its investment ambitions for low-carbon projects. Between 2021 and 2025, the Madrid-based company plans to allocate an additional EUR 1 billion to low-carbon projects, raising the total to EUR 6.5 billion from the EUR 5.5 billion set out in its strategic plan approved in November 2020. In December 2019, Repsol committed to carbon neutrality by 2050.