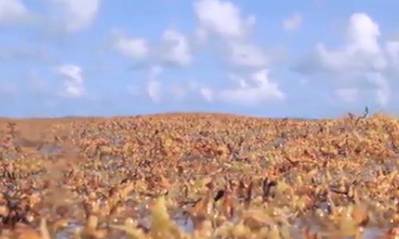 Representatives from 11 countries and territories from North America, the Caribbean and Europe have committed support for the conservation of the Sargasso Sea eco-system for the benefit of present and future generations, informs the Sargasso Sea Alliance (SSA).

The Alliance explains that for more than two years, it has collaborated with the Bermuda government  in a push for the establishment of safeguarding measures for the Sargasso Sea, a unique two-million-square nautical mile ecosystem in the North Atlantic that is without effective legal protection, placing it at risk of long-lasting harm due to overfishing, pollution and more.

The Sargasso Sea, called by Dr. Sylvia Earle “the golden floating rainforest of the ocean,” is named after the Sargassum (pelagic drift algae) that accumulates in the North Atlantic Subtropical Gyre. It is the world’s only sea without coasts, and is a critical habitat for marine wildlife, including tuna, swordfish, eels, turtles, marlin, whales and more, providing resting, feeding and breeding areas and migration paths for many species. Because of the lack of effective governance of high seas areas, the Sargasso Sea and other ocean areas beyond national jurisdiction are threatened by diverse human activities including over-fishing, pollution, ship traffic, and even harvesting of Sargassum.

“Hamilton Declaration on Collaboration for the Conservation of the Sargasso Sea”
During an historic gathering in Hamilton, Bermuda, international representatives signed the Declaration, a significant and powerful platform for voluntary action to minimize adverse effects from shipping, overfishing, and illegal activities in the open sea region. It also establishes a Sargasso Sea Commission to provide advice and advocacy to ensure effective stewardship.

Signatories include the governments of Bermuda, United States, United Kingdom, Monaco, and the Azores Islands. British Virgin Islands, Sweden, the Netherlands, Turks and Caicos Islands, and South Africa also spoke in support together with representatives from the Secretariats of five international organizations, including the Oslo and Paris Commission (OSPAR) from the neighboring Northeast Atlantic region, the International Seabed Authority, the Inter-American Convention for the Conservation of Atlantic Sea Turtles, the Convention on Migratory Species and the International Union for the Conservation of Nature (IUCN).

The Hamilton Declaration can be accessed at:  http://www.sargassoalliance.org/hamilton-declaration
A video about the Sargasso is at: http://vimeo.com/72156864