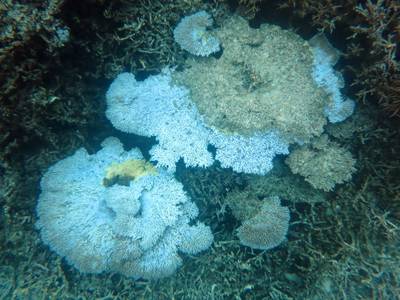 Coral bleaching threat increasing in western Atlantic and Pacific oceans
As unusually warm ocean temperatures cover the north Pacific, equatorial Pacific and western Atlantic oceans, NOAA scientists expect greater bleaching of corals on Northern Hemisphere reefs through October, potentially leading to the death of corals over a wide area and affecting the long-term supply of fish and shellfish.
While corals can recover from mild bleaching, severe or long-term bleaching kills corals. Even if corals recover, they are more susceptible to disease. Once corals die, it usually takes decades for the reef to recover – but recovery is only possible if the reefs are undisturbed. After corals die, reefs degrade and the structures corals build are eroded away, providing less shoreline protection and less habitat for fish and shellfish.
“The bleaching that started in June 2014 has been really bad for corals in the western Pacific,” said Mark Eakin, NOAA Coral Reef Watch coordinator. “We are worried that bleaching will spread to the western Atlantic and again into Hawaii.”
Earlier this year, NOAA’s Coral Reef Watch four-month Coral Bleaching Outlook accurately predicted coral bleaching in the South Pacific, including the Solomon Islands, Papua New Guinea, Nauru, Fiji, and American Samoa. It also recently predicted the coral bleaching in the Indian Ocean, including the British Indian Ocean Territory and the Maldives.
Coral bleaching occurs when corals are stressed by changes in environmental conditions such as temperature, light or nutrients. The coral expels the symbiotic algae living in its tissue, causing the tissue to turn white or pale. Without the algae, the coral loses its major source of food and is more susceptible to disease. Scientists note, however, that only high temperatures can cause bleaching over wide areas like those seen since 2014.
In fall 2014, Hawaii saw widespread coral bleaching for the first time since 1996. If corals in Hawaii bleach again this year, it would be the first time it happened in consecutive years in the archipelago.
Warmer ocean temperatures in 2014 also dealt a blow to coral nurseries in the Florida Keys, where scientists are growing threatened coral species to transplant onto local reefs. Coral reefs in Florida and the Caribbean have weathered repeated and worsening coral bleaching events for the past thirty years. The NOAA Coral Reef Watch monitoring team says that more bleaching so soon could spell disaster for corals that have yet to recover from last year’s stress.
“Many healthy, resilient coral reefs can withstand bleaching as long as they have time to recover,” Eakin said. “However, when you have repeated bleaching on a reef within a short period of time, it’s very hard for the corals to recover and survive. This is even worse where corals are suffering from other environmental threats, like pollution or overfishing.”
NOAA’s bleaching prediction for the upcoming months supports the findings of a paper published in the journal Science last week that examined the threat to marine ecosystems and ecosystem services under two different carbon dioxide emission pathways.
“The paper reports that even if humans limit the Earth’s warming to two degrees C (3.8 degrees F), many marine ecosystems, including coral reefs, are still going to suffer,” said Eakin, an author on the paper. “The increase we are seeing in the frequency and severity of bleaching events is part of why the climate models in that paper predict a dire future for coral reefs.”
The NOAA Coral Reef Watch program's satellite data provide current reef environmental conditions to quickly identify areas at risk for coral bleaching, while its climate model-based outlooks provide managers with information on potential bleaching months in advance. The Coral Reef Watch mission is to utilize remote sensing and in situ tools for near-real-time and long term monitoring, modeling and reporting of physical environmental conditions of coral reef ecosystems.
The four-month Coral Bleaching Outlooks, based on NOAA’s operational Climate Forecast System, use NOAA’s vast collection of environmental data to provide resource managers and the general public with the necessary tools to help reduce effects of climate change and other environmental and human caused stressors.
The outlook is produced by NOAA’s Satellite and Information Service and funded by the Coral Reef Conservation Program, Climate Program Office, and National Centers for Environmental Prediction.
• American Samoa • Caribbean • ecosystem services
Email