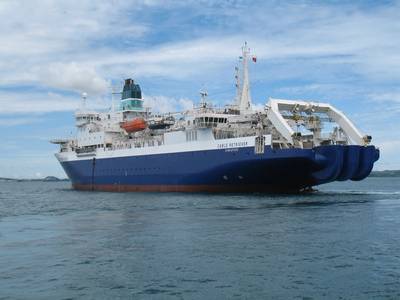 Offshore and subsea services company Global Marine, part of the Global Marine Group (GMG), said its maintenance contract with SEAIOCMA (South East Asia and Indian Ocean Cable Maintenance Agreement) has been extended for five-years, running to the end of 2022.

The SEAIOCMA maintenance zone agreement, which is a cooperative club managed by 46 cable owners, provides the repair of submarine cables that carry international telecommunications traffic. SEAIOCMA spans the area between Djibouti in the west, Perth in the south, Guam in the east and the northern tip of Taiwan. This is the third and final of Global Marine’s three long-term maintenance contracts renewed since the beginning of 2016 (NAZ (North America Zone) announced March 2016 and ACMA (Atlantic Cable Maintenance Agreement) announced January 2017).
Under the terms of the extended contract, which came into effect on January 1, 2018, and expires on December 31, 2022, Global Marine will provide a newly constructed depot in Subic Bay, Philippines. The new depot will continue to serve as the base of Global Marine’s vessel the Cable Retriever, a purpose-designed cable ship  equipped with a 600 horsepower ROV (remote operated vehicle), capable of burying cable up to three meters below the sea bed and mobilizing within 24 hours of a call-out. The Cable Retriever is operated by experienced and fully trained personnel and features specialist equipment.
Global Marine has been providing maintenance services continuously to SEAIOCMA since its inception in 1986 and has completed more than 600 repairs. During that time the network has expanded from 34,000 km of cable maintained to encompass more than 111,000 km. The extension of the SEAIOCMA agreement demonstrates continued customer recognition of Global Marine’s reliability in support of long-term contracts, and its ability to deliver leading subsea maintenance to customers around the world.
Global Marine currently delivers support in three of the world’s six cable maintenance zone agreements. Combined with its joint venture, SBSS, Global Marine maintains 33 percent of fiber optic cable lying across the world’s ocean floor. In the past five years the Company has achieved 99.7 percent of the contractual KPIs across all of its maintenance agreements.
Email

Naval architecture firm Gibbs & Cox said it has been awarded a multi-phase contract from the U.S.' Defense Advanced Research…