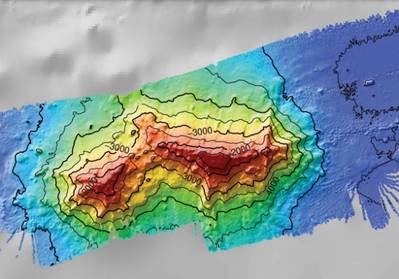 Researchers at Scripps Institution of Oceanography at UC San Diego announced this week the naming of a newly discovered seafloor feature for the late Scripps Oceanography geophysicist Walter Munk.

The International Hydrographic Organization approved the naming of the Walter Munk Guyot (pronounced GEE-oh), a type of seamount distinguished by having a flat peak. The guyot is located 1,600 kilometers (1,000 miles) southwest of Honolulu and rises 3,803 meters (12,500 feet) above the seafloor. Its peak is 1,397 meters (4,583 feet) below sea level.

“This is a love letter to Walter from all of Scripps,” said Bruce Appelgate, associate director and head of ship operations at Scripps Oceanography. “It involved people at Scripps having a great idea, coming together, and having the resources to make it real.” 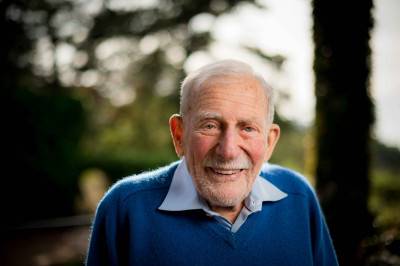 Researchers from Scripps Oceanography imaged the underwater mountain aboard Scripps research vessel Sally Ride just two months after Munk’s February 2019 death. Appelgate was one of several on campus who had sought ways to honor Munk. Appelgate says he had conversations with Munk, a renowned expert on waves and ocean physics, about seafloor features on occasion before Munk’s passing.

“Walter was interested in everything about oceanography, including the seafloor mapping and discovery we support aboard our ships,” Appelgate said.

The Munk Guyot is one of 187 named guyots in the world listed in the General Bathymetric Chart of the Oceans (GEBCO). Of those, 10 are named for Scripps research or researchers. Several of these guyots, such as the Revelle Guyot named for Munk’s close friend, former Scripps Director Roger Revelle, are located in the same region as the Munk Guyot.

Munk’s association with Scripps Oceanography began in 1939. He was a participant in many of the most famous Scripps explorations of the Pacific Ocean during what is often called the golden age of oceanographic field research. He participated in Operations Crossroads, a military atomic bomb test at Bikini Atoll, in 1947, and the 1952-53 Capricorn Expedition to the central Pacific Ocean. Among other things, Capricorn marked the first time that scientists, including Munk, scuba dived to conduct research.

Appelgate collaborated with Scripps Oceanography geophysicist David Sandwell to locate and identify a candidate seafloor feature to honor Munk. Sandwell creates predictive maps of seafloor topography, or bathymetry, from satellite measurements of gravity. These maps are the basis of the seafloor maps available through Google Maps among other sources. Sandwell is also working with the Nippon Foundation-GEBCO Seabed 2030 Project, which aims to complete the mapping of the world's ocean by 2030, and to compile all bathymetric data into the freely available GEBCO Ocean Map. 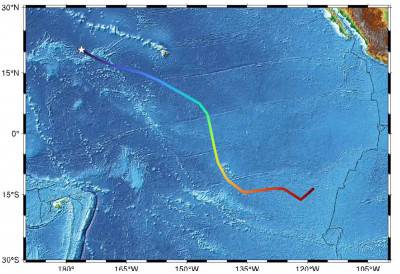 The 110-million-year drift of Walter Munk Guyot to its current location southwest of Hawaii (Image: Scripps Institution of Oceanography)

Ship schedulers at Scripps selected an April 2019 transit of R/V Sally Ride to conduct an opportunistic multibeam sonar survey of the target area. The vessel was set to transit from San Diego to Guam to begin an unrelated scientific expedition, and the survey could be performed without disrupting the transit schedule. Vessel staff including Captain Ian Lawrence and marine technician Daniel Yang, who operated the sonar, helped image the guyot on April 4, 2019.

Sandwell said that geophysicists can tell, using knowledge of plate tectonics, that the guyot formed in the South Pacific Ocean 110 million years ago, submerged 90 million years ago, and has drifted 6,000 kilometers (3,700 miles) northwest since then.

“This would have been Walter Munk Island 90 million years ago,” Sandwell said.