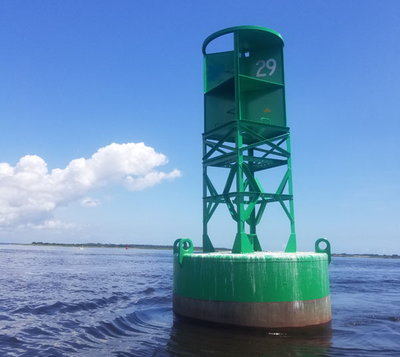 A Coast Guard ATON (Aids to Navigation) buoy in Kings Bay, Ga., that will house one of the new PORTS current meters. (Photo: NOAA)

Maritime navigational safety near two U.S. Navy installations in Kings Bay, Ga., and Portsmouth, N.H. has been improved thanks to new Physical Oceanographic Real-Time Systems, also known as PORTS, installed by NOAA and the U.S. Navy. They are the first new PORTS in two years, and the 34th and 35th in the nationwide network.

The system near Naval Submarine Base Kings Bay, the East Coast home to America’s Ohio-class submarines, is an integrated series of sensors which will provide critical real-time information on oceanographic and meteorological conditions. This will increase the navigation safety of vessels entering and exiting the channels of the St. Marys River and the Cumberland Sound.

The second site is near the Portsmouth Naval Shipyard, whose primary mission is the overhaul, repair and modernization of the Navy’s nuclear-powered attack submarine fleet. A new tide station on Seavey Island along the Piscataqua River will help protect shipyard personnel, critical facilities and U.S. Navy submarines. Other local mariners and agencies will also have access to the real-time water level information, helping them better plan vessel transits and prevent mishaps.

“These two new systems, and the others like them around the country, reduce ship accidents by more than 50 percent, increase the size of ships that can get in and out of seaports, and reduce traffic delays,” said Nicole LeBoeuf, acting director of NOAA’s National Ocean Service. “They also provide real-time, resilience-ready data as coastal conditions rapidly change, potentially threatening our coastal communities.”

PORTS is a partnership program with local port authorities, pilot associations, the U.S. Coast Guard, the U.S. Army Corps of Engineers, the U.S. Navy, academia and other stakeholders across the nation. In addition to other noted benefits, these systems also improve hazardous spill response and enhance recreational activities.

“The PORTS system installed is a critical navigational tool,” Commander Navy Region Southeast Rear Adm.Gary Mayes said. “This NOAA technology will provide submariners and pilots with real-time data to help them make informed decisions that will assist in minimizing risk to both personnel and Navy assets.”

The first PORTS was established in 1991 in Tampa Bay following a deadly collision that occurred in 1981; an inbound freighter collided with the Sunshine Skyway Bridge, causing a bridge collapse that killed 35 people. The accident underscored the need for integrated real-time information to provide comprehensive situational awareness to mariners making safety and operational decisions.

Naval architecture firm Gibbs & Cox said it has been awarded a multi-phase contract from the U.S.' Defense Advanced Research…