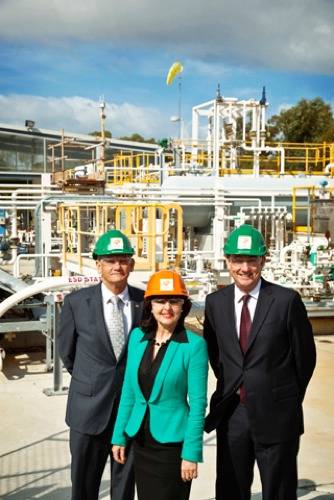 Shell Australia and Challenger Institute of Technology, in Western Australia, have committed to a multi-year partnership to develop training programs for the technicians who will operate and maintain the energy giant’s revolutionary Prelude Floating LNG facility.

Shell and Challenger will jointly develop the training programs, which will be rolled out from 2014 as Shell completes the construction and commissioning of the Prelude FLNG facility, to be stationed in the East Browse Basin off WA’s Kimberley coast.

Challenger’s Australian Centre for Energy and Process Training (ACEPT) at the Australian Marine Complex will be the home base for the delivery of the programs. Challenger will deliver the training, assessment and assurance of process and maintenance technicians so they will be ready to work on the commissioning and startup of the Prelude facility.

Prelude FLNG Asset Manager, Jim Marshall, said the establishment of the world’s first FLNG specialist training courses in Perth would help cement WA as the world’s leading centre of Floating LNG operations. “In ACEPT, Challenger has a world-class facility for vocational training in the FLNG industry,” Mr Marshall said. “We are pleased that through Prelude we have the opportunity to train our people locally, where our Prelude operations team will be based.”

The four year agreement will see Challenger deliver training for an expected 200 technicians working in the production, mechanical, instrument-electrical and service areas. The training program will also feature a strong health, safety and environment focus.

Shell has already recruited its first wave of process and maintenance technicians for Prelude’s operations phase. Recruiting will step up over the next 18 months, as Shell builds up its expected workforce of 350 people, which will be complemented by around 650 contractors.