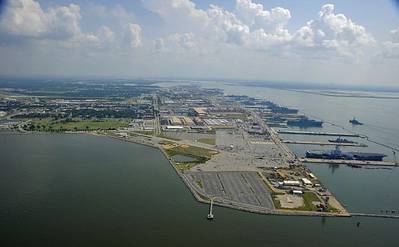 An aerial view of Norfolk Naval Station, the largest naval base in the world. (U.S. Navy photo by Mass Communication Specialist 1st Class Christopher B. Stoltz/Released)

Reuters reported that there are two dead aboard the U.S. Navy Destroyer USS Mahan docked at Naval Station Norfolk last night., as a civilian apparently shot and killed a sailor, and in turn the shooter was in turn killed by based security forces, according to the Navy.

According to the Navy, the incident occurred at approximately 11:20 p.m. at Pier 1 on board USS Mahan (DDG 72). No other injuries have been reported.

Naval Station Norfolk was briefly put on lockdown as a precautionary measure, with the lockdown lasting approximately 45 minutes.

With the exception of Pier 1, operations have returned to normal at Naval Station Norfolk.

The shooting and the details surrounding it are under investigation.

QUALITAS Remos is an engineering company created in 2002 that provides innovative knowledge intensive solutions and services to the operational oceanography community. QUALITAS Remos is leader in the provision, operation and maintenance of HF Radar ocean observing…