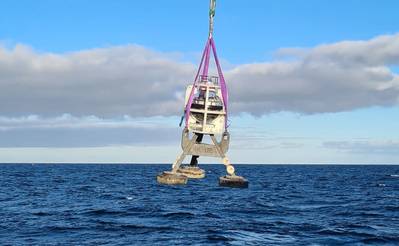 Marine technology company Sonardyne has deployed what it says is a new breed of underwater sensor that is able to self-calibrate, enabling precise, long-duration subsidence monitoring at all depths at Shell Ormen Lange offshore field. The company says this is the first such deployment at scale.

Unlike traditional pressure sensors, which suffer from drift over time, Sonardyne says its AZA technology autonomously re-calibrates in situ.

"A unique control system periodically cycles the pressure sensor from ambient seabed pressure to near-zero, enabling comparison to a highly accurate low-pressure reference sensor for calibration. The reference sensor is never subjected to ambient pressure and is accurate to changes of less than a millibar, or about 1cm of head of water," the company says.

"In-situ calibration unlocks the ability to be able to monitor seafloor subsidence with centimetric accuracy for up to 10 years, without a loss of precision or any need for retrieval and recalibration of the sensors," the company said.

"Each sensor accurately collects pressure, temperature and inclination data at the seafloor, at pre-programmed intervals. The data is then periodically harvested, from an integrated high speed acoustic modem contained within each Fetch PMT or Fetch AZA PMT, using a choice of Sonardyne’s acoustic systems deployed from an unmanned surface vehicle (USV) or conventional ship. The data is then used to calculate any vertical displacement of the seabed at the Ormen Lange field," the company explained.

Shaun Dunn, Vice President of Projects at Sonardyne, says, “Many years ago, geophysicists at Shell set Sonardyne the challenge of creating instruments that were sensitive enough to measure 1cm/year of vertical movement. With this latest generation of Fetch AZA, we have achieved that goal and unlocked the benefits of using this technology to detect extremely low levels of seafloor subsidence as part of proactive reservoir management programmes.”

Sonardyne’s Fetch AZA sensors are low power, allowing for long endurance deployments, and provide time-stamped data, which is often critical to commercial and scientific objectives. With their in-built data storage and high-speed modem capacity, they can support data collection and harvesting using a wide range of other Sonardyne and third-party sensors and are compatible with any Sonardyne 6G equipment, including Ultra-Short Base Line (USBL) systems and modems.

Deutsche Windtechnik announced it has signed several contracts for underwater inspections at offshore wind farms in the North Sea and Baltic Sea.