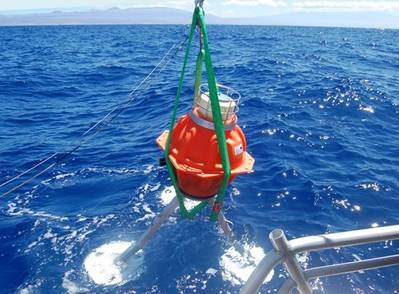 Long-life subsea logging node Fetch was deployed in 550 feet of water to measure ocean temperature and pressure. The Liquid Robotics Wave Glider uploaded the logged data via its high speed acoustic modem, transmitting it to shore via satellite.

In early August off the east coast of America, a team from Sonardyne International Ltd., Liquid Robotics and the National Oceanic and Atmospheric Administration (NOAA) concluded the second leg of an extensive ocean observation technology demonstration project. Using Sonardyne’s Fetch and Tsunami sensor nodes and a Liquid Robotics Wave Glider, the project was performed in collaboration with MARACOOS (Mid-Atlantic Regional Association Coastal Ocean Observing System), NOAA National Data Buoy Center (NDBC) and managed by NOAA US Integrated Ocean Observing System (IOOS) Program Office with the objective to test new long endurance ocean observation instruments that have been designed to work in tandem. The results were displayed at the recent MTS/IEEE Oceans 2013 conference and exhibition in San Diego, California.

The Fetch node was deployed in 550 feet of water to measure ocean temperature and pressure, and the Tsunami sensor in 8,000 feet, while the Wave Glider recorded data on the wind, waves, water temperature and salinity as it transited between the two sensors. Once the Wave Glider was stationed above the location of each instrument, it acoustically uploaded both real-time and logged data which was then transmitted onwards via satellite to shore-based operators for analysis.

Sonardyne’s Fetch and Tsunami sensors are long-life subsea sensor logging nodes that enable data to be extracted on demand from platforms such as Wave Glider via their integrated high speed acoustic modems. Fetch can be configured with an array of different sensors dependent on the monitoring application with standard sensors including high accuracy pressure, temperature and sound velocity. The Wave Glider itself is an autonomous ocean observing platform designed to support a wide variety of sensor payloads. Capable of travelling long distances and monitoring vast areas without refueling, Wave Gliders can transmit data via radio satellite without ever requiring a ship to leave port, thereby dramatically reducing risk and survey costs.

Kim Swords, Sales and Application Engineer at Sonardyne commented, “This type of collaboration represents a highly economical and expedient method of evaluating new ocean research technologies. The data we have been able to collect will help us better understand and predict what is happening in our waters and could improve our ability to predict and detect incoming tsunamis. For example, the tsunami sensor captured the small seismic event that occurred off the East Coast on June 13 and using this technology, we have been able to upload the data and transmit it on to investigating scientists at minimal effort and cost.”