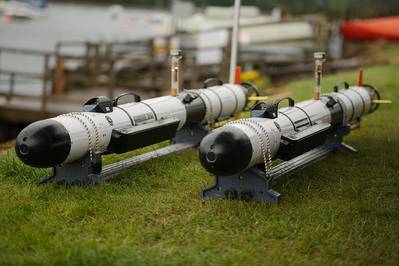 Sonardyne and SeeByte won a UK Defense Science and Technology Laboratory (Dstl) funding to enhance and extend the future operational capability of autonomous and remotely operated systems in battlespace domains.

The collaboration is the phase two of the UK’s Defence and Security Accelerator (DASA)’s Autonomy in Challenging Environments competition and builds on the work both organizations undertook in Phase 1.

As part of the project, Sonardyne and SeeByte will be using surface and underwater assets from Project Wilton, a recently formed maritime autonomous systems (MAS) team based out of HM Naval Base Clyde. The collaboration will culminate in a series of in-water demonstrations at

In addition, Sonardyne’s SPRINT-Nav instrument will also be integrated with the ARCIMS USV to provide an independent navigation reference in GNSS-denied environments.

This project is designed to enable optimal uncrewed underwater vehicle (UUV) distribution for improved subsea communications and navigation in a range of challenging environments.