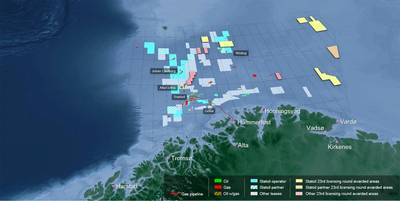 Norway's Statoil said on Monday it would keep drilling exploration wells in the Barents Sea using what it called "regular equipment" after a court upheld an injunction in a patent dispute over specialised drilling technology.
Statoil said the Stavanger court had lifted an injunction on the use of its Cap-X technology in the Blaaman well, where drilling was suspended earlier, but had upheld a ban on the four other Arctic wells planned to be drilled this year.
When presenting Cap-X last year, Statoil said it would help reduce drilling costs. Small Norwegian firm NeoDrill said Cap-X included essential parts of NeoDrill's CAN technology, developed since 2001, and to which Statoil had access as NeoDrill's minority stakeholder since 2010.
"Statoil disagrees that there has been a patent infringement and this will then now be concluded in Oslo District Court," Morten Eek, a spokesman for Statoil said by email.
Statoil also said the injunction was pending NeoDrill posting 20 million Norwegian crowns ($2.4 million) security.
Kyrre Tangen Andersen, a lawyer representing NeoDrill, confirmed that the court had asked NeoDrill to post the security, and said the firm was working on it.
He added the court had agreed to lift the injunction on the Blaaman well because its suspension would had been too costly.
Drilling exploration wells can cost tens of millions of dollars, and Arctic wells are more expensive due to the need to use rigs that can withstand harsh environments.
Statoil's spokesman said the company was planning to complete the Blaaman well this summer, while it was currently drilling the Kayak well in the Johan Castberg field by using "regular equipment".
Statoil plans to drill at least five wells in the Barents Sea this summer, stepping up exploration campaign in the Arctic, which is estimated to hold majority of undiscovered resources off Norway.