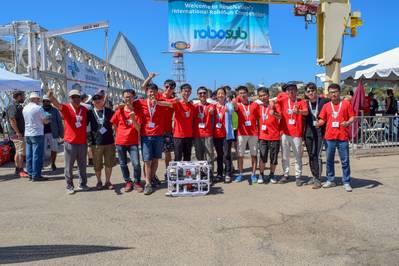 Harbin Engineering University from China takes first place in the 2018 International RoboSub Competition. RoboSub is a robotics program where students design and build autonomous underwater vehicles to compete in a series of visual-and acoustic-based tasks. (Photo by Julianna Smith, RoboNation)

It was an exciting time in San Diego as nearly 50 high school and university teams from around the world made a splash at the 21st International RoboSub Competition at the Space and Naval Warfare Systems Center Pacific Transducer Evaluation Center, July 30 – August 3.

The week-long autonomous submarine competition, co-sponsored by the Office of Naval Research (ONR) and the Association of Unmanned Vehicles International Foundation, tested students’ mechanical, electrical, computer and systems engineering skills—as well as their presentation skills and teamwork while competing for cash prizes (which go directly to the school, usually to a robotic club or program).

“The submarines are all designed and built by students,” said Dr. Daniel Deitz, a program officer in ONR’s Ocean Battlespace Sensing Department and RoboSub judge. “It is amazing to see how every year these teams—whether seasoned competitors or first timers—take a singular set of rules and turn it into 40-plus distinctive, innovative working submarine prototypes.”

While each submarine in the competition is unique, they all have one common mission: to demonstrate autonomous capability by completing a series of visual- and acoustic-based tasks that simulate some of the duties required of today’s underwater vehicles.

To meet this year’s mission requirements, the submarines—without human or computer interaction—had to complete a variety of “casino-themed” tasks that included: touching dice buoys; dropping chips into a roulette bin; pulling a slots lever to fire mock torpedoes through small cutout holes; and cash in by grabbing a chip, then surfacing the vehicle and dropping the chip into a cashier’s register.

Teams also had to create a website, write a paper that outlined their work and give a presentation.

“RoboSub is a well-rounded event, providing participants the opportunity to apply their classroom knowledge to real-world problems—as well as hone their networking, presentation and communication skills as they prepare to enter the workforce,” said Deitz.

According to the recently released DON Strategic Roadmap for Unmanned Systems (short version), which lays out a plan to seamlessly integrate more unmanned systems into the naval services and across all domains, having a well-rounded generation of engineers and scientists is essential to the Navy’s future force.

The Author
Sierra Jones is a contractor for ONR Corporate Strategic Communications.