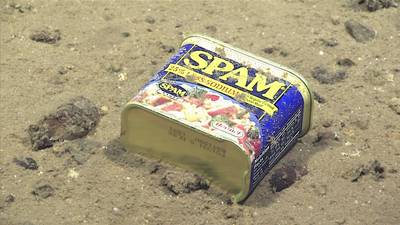 Metal debris – a food tin found at 4,947 meters (3.07 miles) depth in Sirena Canyon off the Mariana Islands. Image courtesy of the NOAA Office of Ocean Exploration and Research, 2016 Deepwater Exploration of the Marianas. (Photo: NOAA)

While deep-ocean exploration is responsible for ground-breaking discoveries, it is also unmasking the true scale of our impacts in the deep ocean. Marine debris is a growing problem, and a new study has shown that even unexplored, remote and protected areas of the central and western Pacific deep ocean are not immune from our touch. 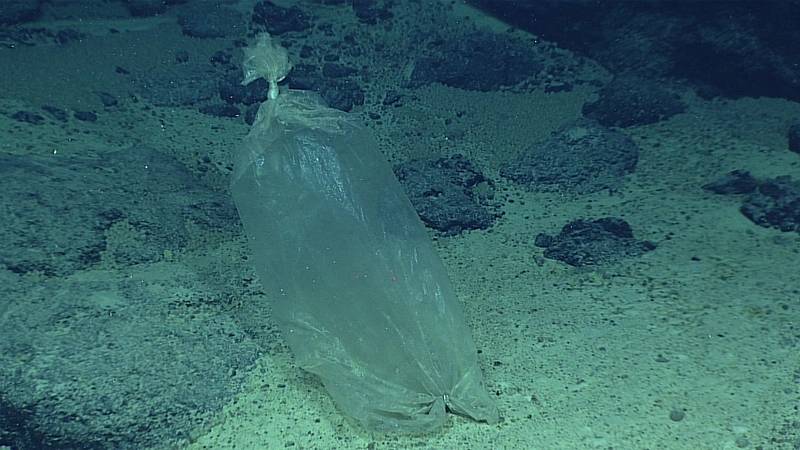 Plastic debris – a plastic bag at 3,767 meters depth on Enigma Seamount off the Mariana Islands. (Image courtesy of the NOAA Office of Ocean Exploration and Research, 2016 Deepwater Exploration of the Marianas) 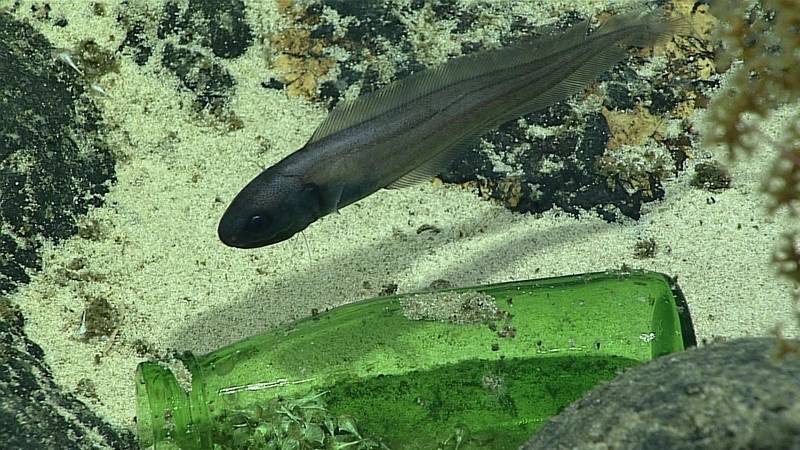 Glass debris – a glass bottle at 1,152 meters depth at Titov Seamount in the Howland and Baker Unit of the Pacific Remote Islands Marine National Monument. (Image courtesy of the NOAA Office of Ocean Exploration and Research, Discovering the Deep: Exploring Remote Pacific MPAs)

Metal, glass, plastic, rubber, cloth, fishing gear and other debris were encountered during 17.5% of the 188 dives reviewed, at depths between 150 and 6,000 meters. While this percentage may seem low, in some areas such as off American Samoa, the densities of debris were as high as 196-1,961 items per square kilometer. This patchy distribution is likely influenced by depth, geological features such as seamounts, the proximity to areas with dense human populations, and past conflict in the region, with 5.2% of debris observed consisting of bullets, bombs and other war-related items. 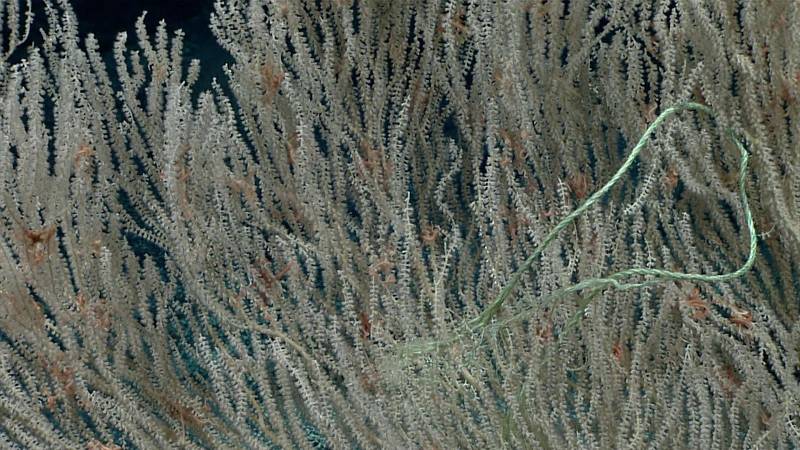 Fishing line entangled in a large primnoid coral at 1,772 meters depth in the Musician Seamounts in Areas Beyond National Jurisdiction. (Image courtesy of the NOAA Office of Ocean Exploration and Research, Deep-Sea Symphony: Exploring the Musicians Seamounts)

Of the debris observed, 39.13% were directly impacting deep-sea life, including corals entangled with fishing gear. However, not all interactions appeared to be negative; some animals used debris for shelter or as substrate to attach to. Additionally, as these observations were only of debris larger than 2 centimeters in size, there are likely many unseen impacts, such as from microplastics and chemicals leaching out of debris.

The naturally slow biological and chemical processes operating at depth, coupled with the types of materials that are used commercially, suggest that debris is likely to persist in the deep ocean for long periods of time, ranging from hundreds to thousands of years, making these results quite alarming, especially as use of the deep ocean is increasing. 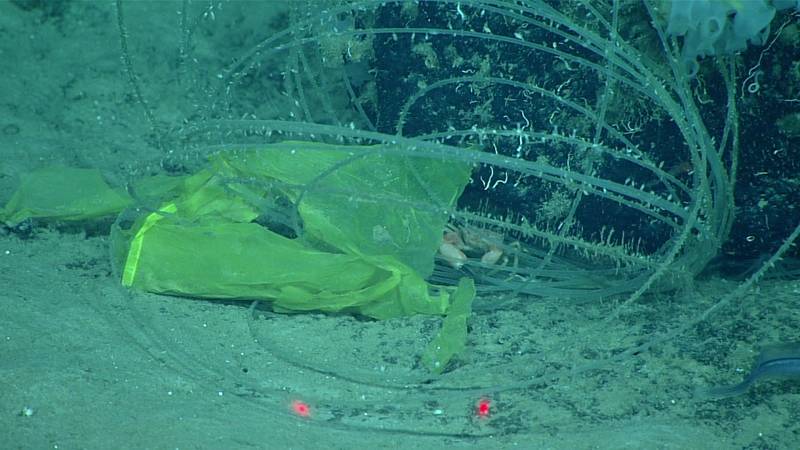 A plastic bag and fishing line providing shelter for a crab and substrate for cirripeds (barnacles) at 791 meters off the main Hawaiian Islands. (Image courtesy of the NOAA Office of Ocean Exploration and Research, 2015 Hohonu)

This study serves as a reminder that we need to take steps to reduce the flow of debris into the marine environment through working to stem the debris tide at point sources, reverting to a circular economy, innovating away from single use materials and ultimately consuming less.