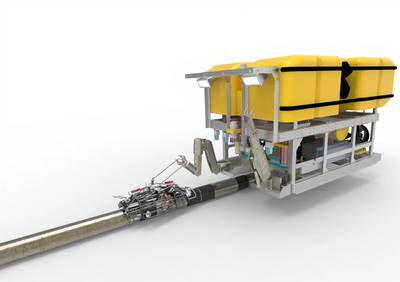 According to the company, the solutions. called the ART vPush, provides efficient, cost-effective, hydrate detection at a level that has not been previously available.

The tool uses TSC Subsea’s ART technology on a moving platform to rapidly assess pipeline contents over complete pipe runs. Data is collected in real-time and processed with several algorithms to monitor signals from the far side of the pipe which detect if hydrate is present.

Typically deployed via an ROV manipulator, it can also be fitted directly onto an ROV and has a depth rating of 3,000 meters. The high-speed data collection achieves cost savings by minimizing ROV and vessel time, TSC Subsea said.

TSC Subsea said that the solution was developed to meet the specific needs of a major operator. It did not say who the operator was.

"TSC Subsea collaborated with DOF Subsea Norway AS to complete the project for the operator in Angola, West Africa," the company said.

"Tasked with locating a hydrate in the pipe, the team deployed the ARTvPush which scanned 12km of 8” 3LPP coated water injection line in just 33 hours at 1,300m. The hydrate plug was found and scanned for exact measurements," the company said.