In our last MTR, to mark 25 years of the UK’s National Oceanography Centre (NOC) working with AUVs, we talked with Dr. Maaten Furlong, Head of the Marine Autonomous & Robotic Systems Group at NOC, about the organization’s history and future plans. Now we take a deep dive into the Autosub program.

Similarly, in 1996, while the first Autosub splashed into the water, just outside the NOC’s then new Southampton facilities, work on it had been underway for some time already. In fact, the idea for this vehicle had dates back to the IOS at Wormley. Two staff there had recommended, in a European Commission review paper, the need for an “untethered remotely operated vehicle (UROV)”, capable of diving down to 6,000m, able to navigate, operate for 24 hours and gather and store large amounts of data. At the time, that was a tall order. But others at Wormley had similar ideas with support from the UK’s Natural Environment Research Council (NERC), the Autosub program was launched.

Initially, in 1987, there were two vehicle concepts. Dr. Maaten Furlong, Head of the Marine Autonomous & Robotic Systems Group at NOC, takes up the story: “The first was the Dolphin vehicle, it was a very long-range system which was focused on physical oceanography. Like a modern glider, it would go up and down in the water column sending back data on the physical properties of the ocean. The second was the DOGGIE concept. This was a deep ocean vehicle which would look at geology and geophysics (using sonar). These were the primary ideas that sat behind the Autosub program and a huge amount of work happened at IOS in developing these concepts.”

Autosub 1 during trials off Oban, Scotland, in 1999. All images from the National Oceanography Center.

The IOS scoped out what was needed to build these types of systems – where new developments were needed – and then set about tackling them. It was an ambitious goal and, perhaps unsurprisingly, the program slipped. A 1992 target date for sea trials was shifted to 1996 and less ambitious specifications (500m depth and 70km range) were drawn up – largely due to challenges around power supply for longer missions in a pressure housing suitable for 6000m. Something of a compromise was also agreed; to try and create a base platform to meet the needs for potential users of Dolphin and DOGGIE.

“It was amazing what was achieved,” reflects Furlong, “especially when you consider the technology they had then – poor batteries, slow processors and no roadmap,” he says. “The team had to build a complete vehicle, pretty much from scratch, without any guidance.” It was a new arena. When the Autosub 1 was first presented, there were just 36 other AUVs known at that time. “They designed all the pressure vessels, they did all the testing, they built all the control architecture,” says Furlong. Part of the latter was in collaboration with Florida Atlantic University using Lonworks modules, enabling a distributed control architecture, which remained with the vehicles right through to Autosub6000. “The distributed architecture of the system was really ground breaking,” he says. 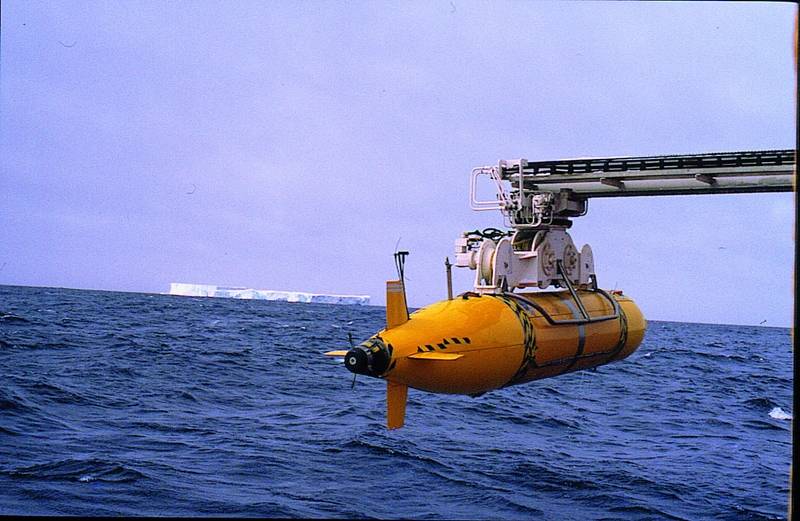 Operations in 1999, with Autosub 2 in Antarctica. All images from the National Oceanography Center.

MIT’s Odyssey II had completed a survey off British Colombia and International Submarine Engineering’s Theseus laid a 175km fiber optic cable under sea-ice in the Canadian Arctic. Woods Hole Oceanographic Institution’s Autonomous Benthic Explorer had also been making observations around the Juan de Fuca ridge. This wasn’t inexpensive work. Up to that point, NOC had spent some £5.3 million on Autosub-1 development (in 1989 terms).Following demonstration missions off Dunstaffnage Marine Laboratory (now the Scottish Association of Marine Science), Autosub-1 started doing the science missions it was built for, including herring stock assessments in the North Sea using a fish finding echo sounder, leading to krill assessment work in Antarctica, and a project in the Strait of Sicily, where Autosub-1 got stuck under a ledge and required the help of an ROV to be dislodged.

Autosub-2 – a major rebuild of Autosub-1 was launched in 2000. It saw the initial vehicle’s lead-acid car batteries changed out for 5000 D-cells in carbon fiber tubes, helping to extend Autosub-2’s range to 400km.  Autosub-2’s focus was on under-ice missions, including work in the Fimbal Ice Shelf. This was risky work. Having made one journey under the Fimbal Ice Shelf, in 2005 Autosub-2 made a second journey – never to return. Luckily, aware of the risks of under-ice deployment, Autosub 3 was already being built and quickly replaced Autosub 2, says Furlong. Its crowning glory was work under the Pine Island Glacier in 2009. A total track of 887 km was covered over 167 hours, of which 510 km was beneath the glacier, mapping the underside of the ice with an upwards looking multibeam system.

However, one of the problems with Autosub-3 was that it was quite shallow rated, at 1600 m, and it still used primary batteries, says Furlong. So work started on Autosub6000 – a 6000 m-rated system. It used a lot of the technologies in Autosub 3, but moved over to rechargeable pressure tolerant lithium batteries, enabling the depths targeted. “Initially there were real concerns over the compressibility of the syntactic foam used,” says Furlong. “These vehicles are ballasted, so they are pretty close to just slightly positively buoyant. The worry was that the foam would compress faster than the seawater which could result in the vehicle becoming negatively buoyant and potentially sinking if it stopped moving. The other concern was how to accurately locate yourself at the seabed. You start at the surface with a GPS fix, then dive through 6km of water drifting with the current, and finally about 150m from the bed you can navigate using a Doppler Velocity Log and compass. So there was some early work done on to address this navigation offset problem, using a Linkquest USBL system to locate and send navigation offsets to the sub. 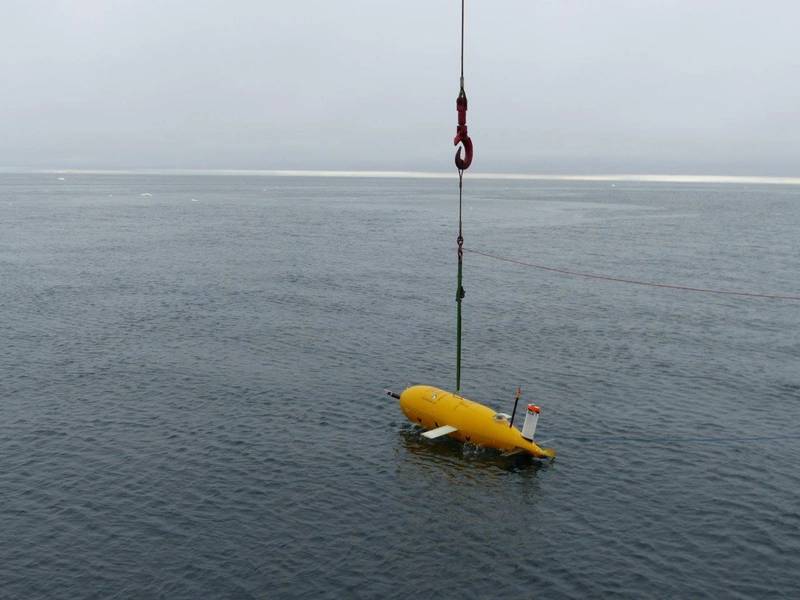 ALR1 on the Filchner-Ronne deployment in 2018. All images from the National Oceanography Center.

Autosub6000’s first science mission was bathymetric surveys of scours in the Agadir Canyon, in 4000 m water depth northwest of Morocco in 2008. It also went hydrothermal vent hunting in the mid-Cayman rise in 5000 m water depth and discovered world’s deepest hydrothermal vent at the time. Autosub6000 has also worked on the Darwin mounds in Rockall Trough area, undertaking high frequency side scan and photography surveys, looking at cold water coral, and also work in marine protected areas, says Furlong. “It’s also done work mapping the walls of Whittard Canyon, which involved rotation the multibeam sonar and angling it so it would image the canyon sides.”

However, there were still challenges with Autsub6000. “It’s a great vehicle, and has been really successful, but it is still limited to deployment from Research Vessels. We wanted to go further, as there are many missions which you just couldn’t do with Autosub6000.  One example is a full Arctic crossing from Svalbad (Norway) to Barrow (Alaska) monitoring under the ice as you go, a second is surveying ocean choke points, such as Drakes Passage, which are currently difficult to routinely monitor.” The result was the Autosub Long Range (ALR) development in 2010-11. “It was quite different to the existing subs,” says Furlong. “A lot of new developments were required to enable the increased endurance with a lot of focus on very low power electronics. So we moved from Lonworks to a new system running on Windows CE on what was effectively, mobile-phone based processors.” Not everything was new; the pressure spheres for ALR 6000 were repurposed 1970s forgings that had been manufactured for pop up seismometer spheres. Some of the ALR’s early work included missions under the Filchner-Ronne Ice Shelf, west Antarctica. It went on two missions, going 108 km in, under fast sea-ice. The AUV was 994 m deep, under ice that was 550m deep.

Up until and including ALR 6000, each Autosub development had a focus, whether that was science, under-ice work or long-range operations. Under NOC’s latest program, Oceanids, that focus has subtly shifted. “Whereas we’ve been working very much on single vehicles being used for single focus science or process studies, Oceanids is about building the next generation of vehicles using reusable modular technology. As the fleet increases and diversifies, we want to be able to reuse as much of these building blocks as possible.” 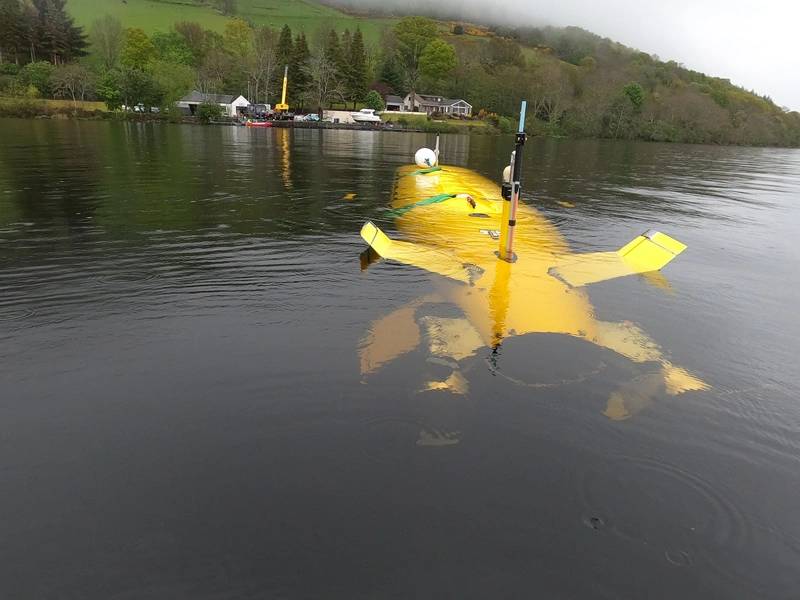 Autosub 5 (formally A2KUI) during trials in Loch Ness in May 2021. All images from the National Oceanography Center.

Under Oceanids, an upgrade to the ALR, the ALR 1500, has been built. “We’re (now) in the process of upgrading the ALR 1500 and also wanted to retrofit those developments into the ALR 6000,” says Furlong. NOC is also building A2KUI (AutoSub 2,000 m under ice), now renamed Autosub 5. “This will replace the Autosub6000 and is also a replacement for the under-ice capability of the Autosub 3.” And then there is Autosub Hover 1 (AH1), which has re-package the modular technologies of Autosub 5, into a hover capable vehicle, says Furlong.

For all these new vehicles, NOC has moved over to using the robot operating system (ROS) in its control architecture. “We’re also running our own web-based command and control system,” says Furlong. “It doesn’t just control these vehicles, it also controls our glider fleet, so it’s the one control system to rule them all.  The goal is to build an extensible common interface to co-ordinate and control large diverse vehicle fleets.”

The campaigns also continue. Early January, a crew set out on the TARSAN campaign (Thwaites-Amundsen Regional Survey and Network Integrating Atmosphere-Ice-Ocean Processes). TARSAN will involve multi-day deployments of ALR1 under the Thwaites Glacier in Antarctica from the Nathanial B Palmer research vessel. “As with most campaigns this has involved adaptations of vehicle (ALR1) for the specific science and operational requirements.  In this case with a focus on the under-ice deployment,” says Furlong. Ahead of the mission, ALR5 was used to test some of the processes and procedures during trials in Loch Ness, Scotland. “It is an ambitious set of deployments,” says Furlong. “Within the TARSAN campaign, we will be working with a number of other partners and their AUVs and gliders. However, the ALR will be undertaking some of the more ambitious and risky deployments, but the testing we have done has minimised this risk and should hold us in good stead.”