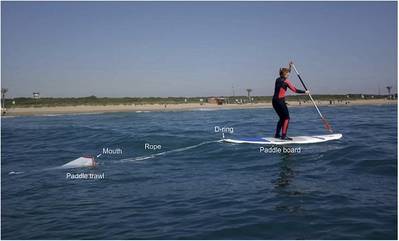 Mounted on paddle boards or kayaks with special trawling nets attached to them, scientists and volunteers crisscross the waters just off Barcelona's beaches collecting unsightly algae mixed with tiny pieces of plastic.

Created by the University of Barcelona in 2020, the "Surfing for Science" project to study microplastic pollution in shallow areas inaccessible to oceanographic research ships is now expanding from the Mediterranean coast in Spain's northeast to the Atlantic coast in the northwest.

It has involved 300 volunteers over the past two years and will now bring in more "citizen scientists" in the regions of Catalonia and the Basque Country who are trained to collect the samples and work on all stages of the study, project coordinators said.

Experts and environmental activists at last month's U.N. Ocean Conference warned that plastic pollution was a growing threat to marine life and humans. Eleven million tonnes of plastic end up in the ocean each year and that could triple by 2040 unless production and use of throwaway containers are reduced, studies show.

On a Barcelona beach popular with bathers, 22-year-old student and paddle boarder Naia Alberdi pointed to a piece of plastic film and colored particles inside a sample bag she had removed from the tip of the trawling mesh.

"If they really knew they were swimming around plastic, there wouldn't be so many people coming here," she said.

In the university laboratory where she took the samples, associate Professor Anna Sanchez Vidal, 45, said the aim of the project was to obtain scientific data on the origins of the plastic pollution, its components, and how it varied over time.

"Knowing what has reached the ocean allows us to know where we have to act on land," she said, adding that the main emphasis so far was on single-use containers.

A sample from last October contained 70,000 plastic bits, including foam, polystyrene, fragments of water bottle caps or polyethylene bags, suggesting a concentration of 45 pieces per square meter - the highest reading ever in the study and one of the highest in the whole Mediterranean, she said.