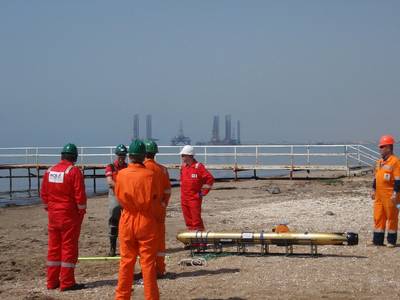 Teledyne Gavia reported the sale of two additional 1,000m depth rated Gavia Offshore Surveyor Autonomous Underwater Vehicles (AUVs) to UTEC Survey Inc., (Houston, Texas). UTEC purchased its first Gavia AUV in August 2011 then took delivery of a second vehicle in April 2012. After honing their AUV operations over the past two survey seasons, the company decided to increase the fleet with the purchase of two further vehicles, the first delivered in October 2013 and the second system delivery due early in 2014.

The UTEC Gavia AUVs are fully equipped for geophysical surveys in near-shore environments out to 1,000 meters. UTEC’s Gavia AUVs have recently proven their capability off East Africa where they are used for a wide variety of offshore survey and inspection tasks. The vehicles are fitted with swath bathymetry, side scan sonar, sub bottom profiler modules, as well as a depth rated camera with strobe lighting. The built-in camera allows for overlapping images which are digitally stitched together forming a complete mosaic of the survey mission. The two most recent vehicle purchases come with the DVL aided ROVINS154 Inertial Navigation System module (IXBlue, France), providing a high accuracy INS in a package that is not of US origin so it does not automatically come under the ITAR export control regulations. All UTEC AUV INS navigation is further enhanced by the additional purchase of both USBL and LBL systems from Teledyne Benthos (Falmouth, Mass.) which provide aiding to the INS enabling higher accuracy and longer endurance missions.

The Gavia AUV system is built up from interchangeable/interlocking modules, allowing each system to carry the required payload for each mission. All system modules delivered to UTEC are 100% interchangeable between vehicles.

UTEC’s client base comprises many of the oil majors, major contractors and engineering consultants with a need for cost-effective high resolution bathymetry, side-scan surveys, sub-bottom profiling and optical inspection. The UTEC AUV fleet provides a viable alternative to survey missions traditionally conducted from a vessel, towed system or ROV, with enhanced safety in hazardous areas. The low logistic Gavia AUV can rapidly be transported to remote locations and quickly be deployed by a small team in a matter of a few hours to undertake missions accurately and safely around existing infrastructure. In pipeline inspection work the low-logistics survey AUV is proving a cost-effective alternative to the nonintervention ROV.

Dave Ross (Americas Regional Manager for UTEC), commented, “The addition of the INS aiding delivered by the Teledyne LBL & USBL systems enables the Gavia AUV to stay subsea for the full mission duration and stay within known positioning tolerances. This greatly enhances the capabilities of an already mature AUV platform.”