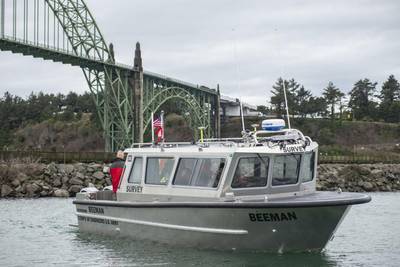 The U.S. Army Corps of Engineers’ Portland District officially welcomed its newest hydrographic survey vessel, the Beeman, with a dedication and christening ceremony in Newport, Ore., on January 11.

The Beeman, whose name honors the legacy of Ogden Beeman, chief of the Portland District’s Waterways Navigation Branch from 1960-1967, replaces and continues the work of the district’s aging vessel, the Patterson, which surveyed Oregon’s coastal entrances for 22 years.

“This is a vessel with a critical mission, as dredging and structural operations and maintenance can’t take place without the data it will collect,” said Karla Ellis, the Portland District’s chief of Waterways Maintenance. “It’s always nice to get a new piece of equipment like this, but it’s equally meaningful to know that it also represents a legacy for family and friends, and we’re always honored to be a part of that.”

The Portland District maintains the vital navigation channels of the Pacific Northwest by performing maintenance dredging, which ensures channels remain deep enough to accommodate the drafts of shipping vessels. The district’s survey vessels collect hydrographic data from river and harbor bottoms to determine where that dredging is needed.

The six survey vessels owned and operated by the district inform the dredging of 244 navigable river miles and 22 ports from Nehalem to Chetco, keeping the region’s waterways safe and reliable for the commercial transport of billions of dollars of goods annually, as well as for recreational uses.

The survey vessel Beeman improves on the technology of its predecessor, the Patterson. It was built by Pacific Northwest builder Worskiff and was specially designed with a shallow draft ideal for safe operation in constrained areas and coastal conditions, allowing the district the best possible opportunity to obtain real-time data in dynamic environments. It's powered by a pair of 250-horsepower Honda Marine outboards.