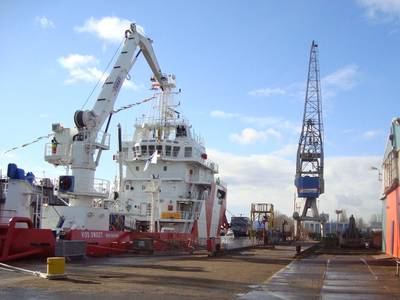 The vessel called at Oranjewerf early January after a voyage from China to The Netherlands to undergo a series of modifications at the shipyard.

VOS Sweet
The new vessel is named after a Rolling Stones song. Among the various modifications Oranjewerf executed are the installation of a 24 tonnes crane and a fully equipped workplace in the aft. Further work included the positioning of an additional mast, a new High Precision Acoustic Positioning (HiPAP) sonar, a Hadex unit with UV filters (a continuous disinfectant for drinking water) and various pipe laying work. After the naming ceremony at Oranjewerf the ship is now fit for deployment as a Subsea Support Vessel.

Vroon Offshore Services
Since 45 years Vroon Offshore Services (VOS) has rendered many and varied maritime and offshore services. Having a fleet of over 100 vessels, the company can be considered as a leading player in operational areas in the North Sea, South-Europe and South-East Asia. Oranjewerf and VOS have a long standing business relationship, which ensured the successful completion of this project.

Oranjewerf Shiprepair Amsterdam
Oranjewerf is a Damen yard. As such it is one of the larger shipyards in The Netherlands. The shipyard’s core business is docking, repair, conversion and regular maintenance of vessels and floating material for the deepsea and inland navigation sectors. The shipyard does construction jobs and mechanic operational work as well.