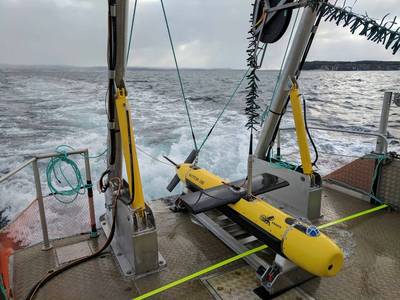 The overall objective, Kraken said, is to provide NUWC with experience operating the KATFISH, the company’s commercially off-the-shelf actively controlled, high-speed towed SAS from a surface vessel of opportunity.

The entire system is designed to be quickly installed and removed from vessels of opportunity, and the towfish may be deployed from either manned or unmanned surface vessels (USV). In the case of this project, the vessel used will be manned; however, the towed system will also be operated from a remote station to simulate unmanned operation, Kraken said.

“This is our second CRADA with the U.S. Navy, said Karl Kenny, Kraken’s President and CEO. “Our first CRADA with NUWC was signed in April 2013 (shortly after Kraken commenced its operations) to evaluate the performance of our AquaPix Synthetic Aperture Sonar. Over the past five years, we have worked well with various U.S. Navy groups, and these efforts have accelerated significantly over the past 18 months. We look forward to further collaboration with NUWC to develop cost-effective solutions that support the warfighter.”

NUWC is part of Naval Sea Systems Command (NAVSEA). NAVSEA along with its predecessor organizations have been responsible for the design, construction, delivery, maintenance and disposal of the U.S. Navy’s ships and ship systems. NUWC is the center for the majority of research, evaluation, engineering operations, and assistance for national underwater systems. It also offers support for domestic weapons systems for any kinds of undersea resources. NUWC DIVNPT has extensive expertise, capabilities, and information in underwater unmanned vehicles, sonar and signal processing.