"Minesto has been contracted to support a leading Asian corporation in the offshore energy sector for the evaluation of a tidal-current site targeting the deployment of Minesto Dragon Class tidal energy powerplants. The work is planned to be completed in the first quarter of 2023 and has an initial order value of EUR 35 000," Minesto said.

Minesto will assist the company with site identification and evaluation based on its hands-on experience from existing sites in Wales, U.K., and the  Faroe Islands.

"Given the unique production site characteristics of our technology, it is vital that we now offer these services to third-party project developers, in addition to our own ongoing site development activities,” says Dr Martin Edlund, CEO of Minesto.

How does Minesto technology work? 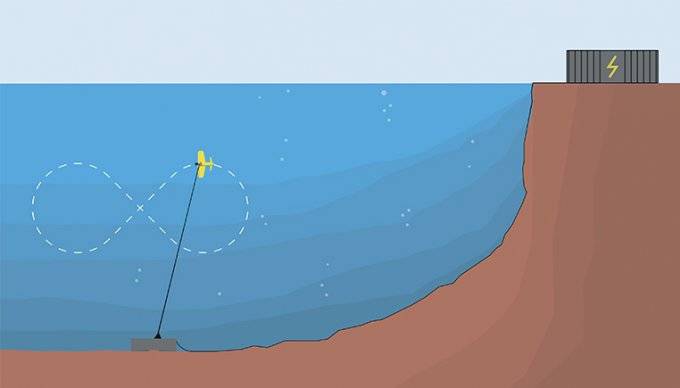 The wing uses the hydrodynamic lift force created by the underwater current to move the kite. With an onboard control system and rudders, the kite is autonomously steered in a predetermined figure eight, pushing the turbine through the water. By doing so, the turbine experiences a water flow several times higher than the actual stream speed.

The turbine diffuses power to the generator, which outputs electricity via the power cable in the tether. The seabed umbilical transfers the electricity to the onshore connection.

Edinburgh-based tidal energy company Nova Innovation has achieved another world-first by doubling the size of its Shetland Tidal Array.