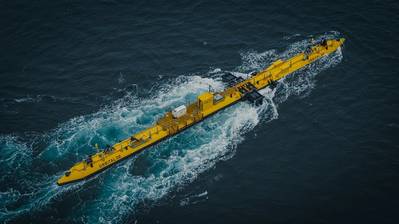 UK-based tidal energy technology firm Orbital said Wednesday it would qualify multiple applications for submission into the UK Government’s Allocation Round 4 (AR4) of the Contracts for Difference (CfD) scheme.

"Following a series of good news stories for tidal energy commercialization in 2021, the company now has a credible course to delivering multi-device projects in locations across the UK as early as 2025," the company said.

The Perpetuus Tidal Energy Centre (PTEC) will be one of the company’s application sites now that onshore consents for the project have been approved by the Isle of Wight Council Planning Committee.

Orbital highlighted that it had been the first company to sign up for deployment at the site which is located to the south of the Isle of Wight, and with offshore consents, onshore consents, and grid connection agreement now completed, the project is now primed to secure part of the ringfenced funding set aside in the scheme to support the UK’s world-leading tidal technology.

In addition, Orbital is also targeting deployments at the Morlais project being developed in Anglesey, where it is a longstanding berth holder. The project was awarded consents for development from Welsh Government on December 10.

"These applications are underpinned by the positive performance of Orbital’s flagship 2MW turbine, the O2, which went into operation in July in the waters off Orkney. The company is also building on the additional momentum delivered by strategic new investment from TechnipFMC, a global leading offshore EPCI contractor to the traditional and new energy industries," Orbital said.

Oliver Wragg, Commercial Director at Orbital, said: “With clear Government backing for tidal stream energy, we are now seeing significant commercial project opportunities come forward with the ability to secure a CfD in AR4 and move into construction. We very much see this as the UK Government firing the starting gun on what will rapidly become a new global renewable energy industry and paving the way for Orbital to provide meaningful volumes of clean and predictable energy to help turn the tide on climate change."

“Successful project applications will result in substantial inward investment in UK supply chain, with creation of hundreds of jobs across the length and breadth of the country. In addition to the manufacture of Orbital turbines, long-term local employment will be created to support the ongoing delivery of these flagship renewable energy projects.”