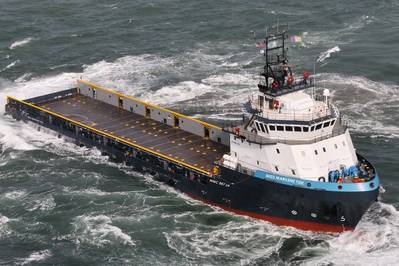 Tidewater Inc. and GulfMark Offshore, Inc. announced Monday that the boards of directors of both companies have unanimously approved a definitive agreement to combine the two companies, creating the industry’s largest owner of offshore support vessels and continuing consolidation in the offshore sector.

The combined company will be operated under the Tidewater brand and will be led by Tidewater president and CEO John Rynd, with the industry’s largest fleet and the broadest global operating footprint in the OSV sector, with an ability to support customers across geo-markets and water depths.

Under the terms of the all-stock agreement, GulfMark stockholders will receive 1.100 shares of Tidewater common stock for each share of GulfMark common stock held by them. Each GulfMark noteholder warrant will be automatically converted into the right to receive 1.100 Tidewater shares, subject to Jones Act restrictions on maximum ownership of shares by non-U.S. citizens. Collectively, these GulfMark securityholders will beneficially own 27 percent ownership of the combined company after completion of the combination, or 26 percent on a fully-diluted basis. Total value to these GulfMark securityholders is approximately $340 million and the equity market capitalization of the combined company is approximately $1.25 billion, both based on the Tidewater closing stock price of $30.62 on July 13, 2018.

Concurrent with the closing, $100 million of existing GulfMark debt is expected to be repaid. On a proforma basis, Tidewater will maintain its industry-leading position of financial strength, with pro forma net debt of approximately $100 million and pro forma available liquidity of more than $300 million. Tidewater will assume GulfMark’s obligations under existing GulfMark equity warrants ($100 strike price).

The transaction is expected to be accretive to Tidewater’s 2019 EBITDA and produce transaction-related cost synergies of approximately $30 million, which are expected to be realized no later than Q4 2019, and additional efficiencies associated with greater scale and scope of operations. The combined company also expects to realize revenue synergies through improved vessel utilization, with future pricing improvements largely driven by the timing and trajectory of a recovery in demand, and the availability of competitive vessels that are in compliance with classification requirements. The larger cash flows and greater diversification of the combined company may also provide access to capital on more attractive terms.

Upon the closing of the combination, the Tidewater Board of Directors will be expanded to 10 seats by adding three directors selected by GulfMark. The transaction is expected to close in the fourth quarter of 2018, subject to customary closing conditions, including stockholder approval of the merger (by GulfMark’s stockholders) and of the share issuance (by Tidewater’s stockholders).

“By combining our fleets and shore-based activities we will be better able to provide customers with access to modern, high-specification vessels while maintaining a strong commitment to safe operations and superior, cost-effective customer service,” Rynd said. “The transaction preserves Tidewater’s strong financial profile and allows the company to fund both organic growth and possible additional acquisitions.”

Quintin Kneen, GulfMark President and CEO said, “At GulfMark, we have been longstanding advocates for consolidation of the OSV industry. This transaction is an important first step in that process. The combined company will be better positioned to build upon GulfMark’s strong track record in the recovering North Sea region. The combined company’s global operating footprint also provides scope for significant scalebased economies and improved utilization of our fleet by redeploying under-utilized vessels across the combined company’s broader operating footprint.”