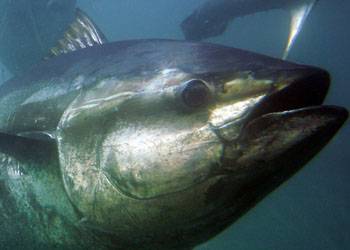 Funded recently by the National Oceanic and Atmospheric Administration (NOAA) one-year, $145,694 grant, she and her team will develop new analytical techniques next season to provide a more quantitative method of estimating the size and number of individuals within surface schools of the most important commercial tuna species in the Atlantic. At present these estimates are made subjectively by observers and/or spotter pilots.

Lutcavage says, “The goal is to combine high-resolution, aerial imagery taken using an unmanned aerial vehicle with sonar acoustic surveys to improve the quality of Atlantic bluefin tuna stock assessments. To achieve this, we’ll need to complete some smaller pilot studies to make sure the techniques we plan to use are giving us accurate information and to allow us to remove biases inherent in aerial surveys.”

Lutcavage’s research group is one of NOAA’s pilot research groups in the use of a hexacopter, or remote-controlled aerial vehicle, to study fish in natural conditions at sea. These small, maneuverable craft carry a high-resolution camera mounted in the belly, to hover over schools of tuna, allowing researchers to photograph and later count individuals in the group. Coupled with sonar, the new aerial survey tool should offer an unmatched, detailed picture of bluefin tuna populations in the north Atlantic. They nicknamed their aerial vehicle WASABI, for Water Imaging Aerial Surveying Automated Biological Instrument.

And as usual for the LPRC, Lutcavage’s Gloucester-based research team will collaborate with long-term tuna research partners and stars of television’s “Wicked Tuna” series, Captain Bill “Hollywood” Muniz and his spotter, Mark Brochu. Wayne Perryman, leader of a NOAA project using hexacopters to study killer whales off the coast of British Columbia, is advising the UMass Amherst group on this project.