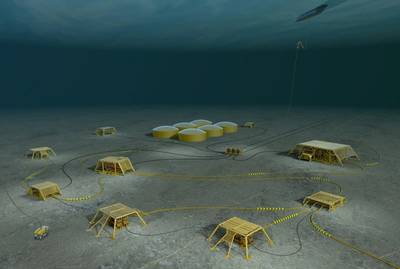 ABB has entered a US$100-million research and development joint industry program (JIP) with Statoil to develop solutions for transmission, distribution and power conversion systems designed to power and control subsea pumps and gas compressors at depths of 3,000 meters, and over vast distances. The agreement is seen as an important step on the path to develop complete subsea oil and gas producing facilities.

Statoil is leading the JIP on behalf of other participating oil companies, while ABB is responsible for developing the new technology. It follows an extensive subsea power study executed by Statoil and ABB during 2012. The total value of the agreement is $100 million, which will be jointly funded by all participating companies.

The five year program is pivotal to the development of technologies required to power and control large-scale subsea pumping and gas-compression projects planned for the Norwegian continental shelf, the Gulf of Mexico and other places around the world. Subsea pumping and gas compression contribute to improved utilization of oil and gas resources through greater recovery rates, reduced production costs and the further development of deep water production.

The JIP will provide solutions for transmission of electrical power up to 100 megawatts (MW) over a distance of 600 kilometers (km) and to depths of up to 3,000 meters (m) which is important for the development of remote oil and gas fields located far from other infrastructure.

Transformers are one of the components that need to be equipped to withstand the pressure of standing on the seabed for several decades. This is from the testing in Finland of a transformer for the Norwegian Continental Shelf from an earlier project. “The expanding oil and gas frontiers continue to provide ABB with rewarding opportunities,” said Veli-Matti Reinikkala, Head of ABB’s Process Automation division. “ABB has been a leading innovator of power conversion solutions to subsea installations for over 15 years. We are delighted that Statoil, a pioneering company in subsea technology, has decided to partner with us once again.”

This subsea electric power distribution technology enables several electric loads, such as pumps and compressors, to be supplied through a single power cable. This will reduce investment costs significantly compared to existing solutions using one cable for each individual load. The new technology, for example, will make savings of more than $500 million, if eight loads are linked through a single cable over a distance of 200 km from other infrastructure.

To ensure compact and reliable solutions, the equipment will be enclosed in liquid filled, pressure compensated tanks, with components tested extensively under the full pressure they will experience at the target water depth. The program entails material and component qualification, detailed design and full-scale testing of a 36 kilovolt (kV) distribution unit and two variable speed drives for pump and gas-compressor applications, respectively.