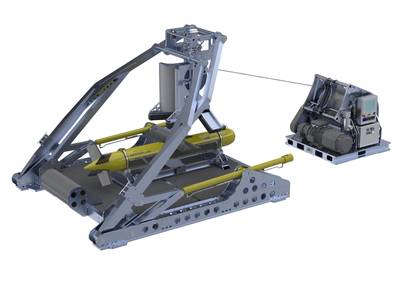 Ultra Sonar Systems (Ultra) has joined forces with Kraken Robotic Systems Inc. (Kraken) to support the supply of its SeaScout system to the Royal Danish Navy.

SeaScout is comprised of Kraken’s KATFISH towed Synthetic Aperture Sonar vehicle, Tentacle Winch and Autonomous Launch and Recovery System (ALARS) and will be integrated onto the Royal Danish Navy’s optionally unmanned surface vessels in support of their mine countermeasure activities.

KATFISH is a high speed, actively stabilized towed Synthetic Aperture Sonar vehicle designed to be deployed from manned or unmanned surface vehicles. Equipped with Kraken's AquaPix synthetic aperture sonar, the KATFISH is designed to survey the seafloor in ultra high-definition at larger area coverage rates than ever before.

Ultra’s Integrated Logistic Support (ILS) engineering team will provide expert support to Kraken throughout the delivery phase in the production of ILS documentation, as well as supporting Kraken’s installation and commissioning teams in the field, with an option to continue to support the complete SeaScout system throughout the lifecycle once it is in service with the Danish Navy.