During the dog days of summer here in the Great Lakes, scientists at NOAA’s Great Lakes Environmental Research Laboratory (GLERL) are already thinking about the ice that will form on the lakes this winter.

This year, NOAA GLERL and a team of federal, university, and industry partners are conducting test deployments of an autonomous underwater vehicle (AUV) in Lake Michigan, with the ultimate goal of using it under lake ice during winter to collect ecological and water quality data. Observations of winter ecology are difficult to obtain compared to observations in the ice-free season, when most fieldwork takes place – which makes this hunt for winter data especially important.

In the world of Great Lakes research, the start of winter traditionally signals the end of fieldwork for the year. Buoys come out of the water, and research vessels – which aren’t designed for use in ice-covered waters – are docked for the season. Scientists get to work analyzing new data from the previous field season and tuning up field equipment for a fresh start in the spring. This break leads to a several-month gap in most of GLERL’s field data, but this project aims to fill that gap using the high-tech SAAB Sabertooth AUV.

One underwater robot, many important jobs
One of the AUV’s main tasks will be to collect water quality data, benthic (lake bottom) data, and fish and zooplankton observations. These observations will be collected using an acoustic imaging system, and will contribute to our understanding of important wintertime ecological processes in the Great Lakes. While summer is widely considered to be the peak time of year for biological productivity, biological processes still occur during the winter and are understudied in the Great Lakes. NOAA GLERL’s winter observations may even lead to unexpected discoveries, as new GLERL data suggest that some Great Lakes biological processes may actually accelerate during the winter months. Ice cover is seen as a key variable in the regulation of biological processes in the lakes during winter. Enhancing our understanding of these processes is particularly important as climate change may have implications for the extent, thickness, and duration of seasonal ice cover.

The Saab Sabertooth is an autonomous underwater vehicle (AUV) that NOAA GLERL will operate under ice during winter in the Great Lakes.

World-class technology in the Great Lakes
The SAAB Sabertooth AUV is no average piece of fieldwork equipment; it’s among the most advanced and complex underwater vehicles in the world. Navigation is one of the biggest challenges AUVs face, since GPS signals are unavailable underwater. This AUV contains an Inertial Navigation System, which keeps track of the vehicle’s movements with extreme precision. Based on its known deployment location, the vehicle uses this navigation system to calculate its exact location throughout its mission with minimal error. When within range, acoustic beacons anchored nearby in the lake are also used to confirm the AUV’s location.

In addition to the AUV itself, this effort also includes the development of a fully integrated docking station that allows the vehicle to recharge its battery and transfer the data it’s collected during its winter excursion. The vehicle’s ability to safely dock, charge its battery, and transmit data to scientists is a critical component in its ability to function under ice without human help. 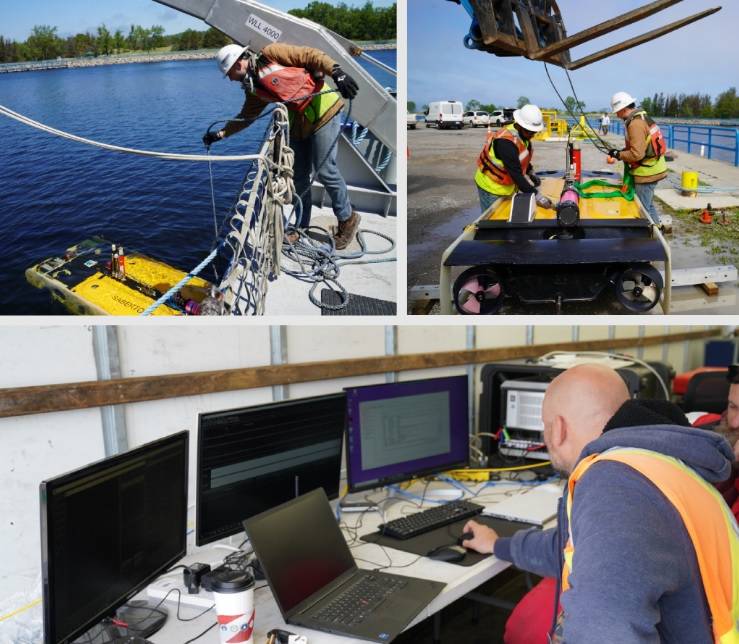 Preparing this AUV for deployment is no small task. Requiring multiple computers and a whole team of people, the initial calibration of the vehicle takes at least a full day.

The large size of the AUV provides ample space, flotation, and electrical resources for simultaneously carrying a large suite of sensors that make multitasking a breeze for this high-tech vehicle. The various sensors work together to ensure the vehicle stays upright, avoids collisions with boats, and doesn’t accidentally hit the bottom of the lake. Plus, robust propellers allow the AUV to make precise turns and hover at a fixed depth, making it much easier to maneuver than its torpedo-shaped cousins.

When it’s not in the Great Lakes helping NOAA with environmental research, this vehicle can usually be found performing tunnel inspections at hydroelectric power facilities around the world – including locations like California, South Korea, and Turkey. The AUV’s ability to navigate through these tunnels allows them to be inspected without being drained, saving considerable time and money. Just as it navigates through these enclosed tunnels, this impressive underwater robot will soon be navigating its way under Great Lakes ice cover. 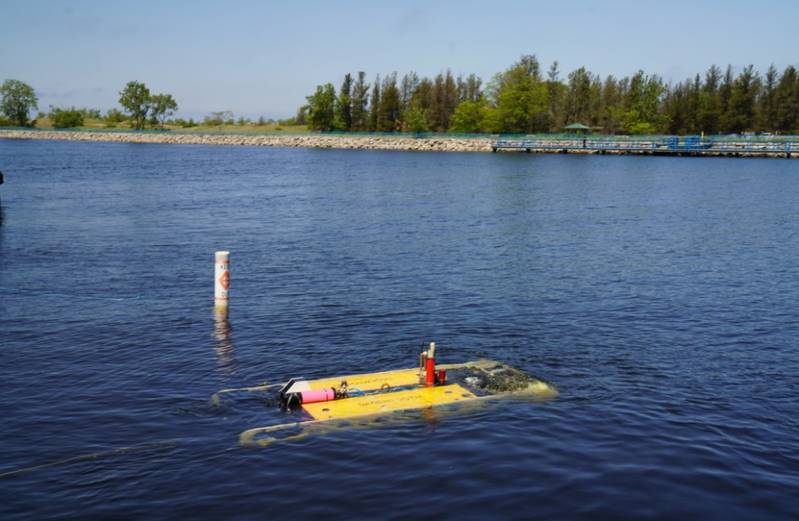 Saildrone Hires Cuyler as COO and Jones as Sales VP

Calecore provides offshore integrated site investigation solutions including geotechnical, geophysical, 2DHR, environmental and ROV survey services. Operating globally we undertake projects from our own fleet of vessels and clients assets and are specialists in Harsh and Remote working.