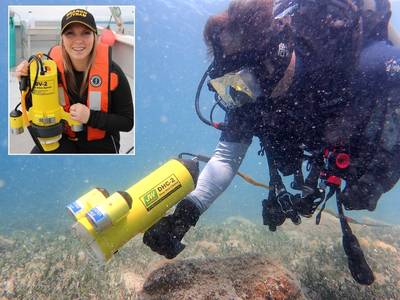 Many aquaculture farms are discovering an underwater video system is a must-have tool for their operations. The camera transmits live video to the surface for viewing and recording allowing the aqua farmer to check the health of the finfish or shellfish, as well as the condition of the tanks, cages or area where they are being cultivated. Operators can instantly see how the population is fairing, if nets need repairing, if predators have entered, the condition of ropes and anchors, the amount of waste material present and other important environmental factors. This allows the farmer to make quick decisions to keep his stock healthy, intact and profitable.

One company employing this technology is Grieg Seafarms in Newfoundland, Canada. The company recently received approval from the provincial government to begin construction of what will be the largest and most modern salmon hatchery in the world. In addition to the land-based hatchery, Grieg will also construct a number of sea cages in Placentia Bay where fish will mature until ready for harvest. The $75 million project will be a blessing for the area’s economy creating more than 1,800 jobs. One of first tools the company acquired to assist in this project is JW Fishers DV-2 drop video system which has a high resolution color camera mounted in rugged, corrosion-proof housing equipped with two high intensity LED lights. The camera is lowered from a topside vessel or platform and continuously transmits live video to the surface for viewing and recording. The subsea picture can be displayed on a TV, video monitor, computer, or Fishers VRM-1 which has a built-in ultra-bright LCD monitor and digital video recorder. The system will allow company officials to oversee the underwater construction process and prove instrumental when the aquafarm goes into full operation.
Another Canadian company involved in aquaculture is SIMCorp with offices in New Brunswick, Nova Scotia, and Newfoundland. The company offers clients a full range of services including environmental management, site remediation strategies and waste management plans. They have considerable experience working with licensing and environmental regulatory agencies, as well as extensive knowledge of environmental compliance monitoring, waste management and new site applications in each of the respective jurisdictions. “Our teams have worked with a variety of species including Atlantic salmon, Arctic char, Rainbow trout, Atlantic halibut, Atlantic cod, green sea urchins, blue mussels, sea scallops and sea cucumbers,” said founder Bob Sweeney. SIMCorp’s clients include many of the marine finfish operators in the Atlantic region. The company employs teams of professional marine biologists and technicians who are fully equipped to work on all stages on production. One of the tools the teams employ is Fishers drop video system. SIMCorp biologist Janelle Arsenault routinely works with the drop system and reported, “It produces a great picture of subsea environment and helps make our job a little easier.”
Aquaculture farmers are not the only ones getting help from these underwater cameras. CH2M, a multibillion dollar company with offices around the world, offers a diverse range of environmental, engineering, management and consulting services. They are ranked as the world’s top environmental firm and have a long history of solving clients most challenging and complex problems. On a recent project in Puerto Rico, a team of CH2M divers assisted government regulators by collecting sediment samples from the ocean bottom and sending live video of the procedure to observers on the topside support vessel. The camera system the team acquired for this job was Fishers DHC-2 diver-held video system with 300 feet of umbilical and a VRM-1 recorder and monitor. CH2M biologist and AAUS Scientific Dive Safety Officer Lora Pride reported, “We are very pleased with the equipment purchased from Fishers. The video quality is great and the camera and monitor are easy to operate.”
A few of the many other environmental groups and marine researchers using Fishers underwater video systems are Envitech Middle East and Environmental Agency Abu Dhabi in United Arab Emirates, California Dept. of Fish and Game, University of Maine, Kuwait Institute for Scientific Research, Aquafact Environmental Consultants in Ireland, United States Environmental Protection Agency Atlantic Ecology Division, Arkansas Game and Fish Commission, National Oceanic and Atmospheric Administration’s (NOAA) Great Lakes Environmental Research Lab, Bahrain Center for Studies & Research, Virgin Islands National Park, Khaled bin Sultan Living Oceans Foundation, NOAA Office for Coastal Management, Delaware Dept. of Natural Resources & Environmental Control, Flathead Lake Biological Station in Montana, Tampa Bay Aquatic Preserves in Florida, and Taiwan University’s National Institute of Oceanography.
• waste management • Arkansas • Canada

Four decades after the company was founded, Sonardyne has remained true to its roots as a subsea pioneer. Innovation and performance have maintained Sonardyne’s reputation for technical leadership and today it has an unrivalled portfolio of acoustic and non-acoustic…