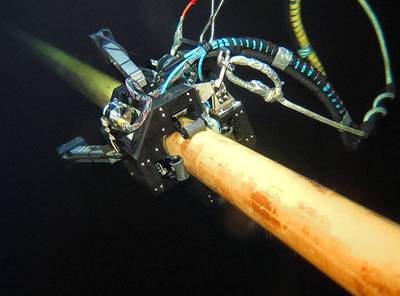 Welaptega delivered the system called RCIS (Riser/Rope Cleaning and Inspection System) to the Norwegian offshore services company Ocean Installer, which used the RCIS for riser cleaning operations carried out in Norwegian waters as part of the Balder X project.

This project with Ocean Installer marks the first occasion that an RCIS has been used in the field, Welaptega said.

According to Welaptega, the RCIS frame is towed by an ROV at approximately 1m/s, efficiently cleaning both soft and hard marine growth.

An optional module consisting of four cameras performs a full 360-degree close visual inspection of the riser or rope surface.

"The RCIS, which can be used for unmanned operations, operates efficiently and requires no specialist offshore technicians to operate it, thereby helping to keep operational costs low and reducing POB," Welaptega said.

Tyler De Gier, Welaptega General Manager said: "Building on the decades of practical experience we have gleaned with our proven mooring rope cleaning and inspection Rope Measurement System, the RCIS cleans and inspects the surface of subsea tubular components such as flexible risers, marine power cables, umbilicals, and fiber/wire moorings.

"We are delighted to have been selected by Ocean Installer to deliver this scope, providing an efficient cleaning solution that saves days of DSV time compared to conventional means."

The Balder X Project is focused on redeveloping the Balder and Ringhorne fields on the Norwegian continental shelf (NCS).

BHGE and Ocean Installer last year won a contract to engineer, procure, construct and install 16 new subsea production systems (SPS), umbilicals, risers, and flowlines to the Jotun A FPSO. The firms will also carry out decommissioning work in the field.