Brazil is a country with a coastline over 7,000 km long, bathed to the east by the Atlantic Ocean. Along this coastline and offshore is where the country develops its fisheries activities, maritime trade and the exploitation of a variety of biological and mineral resources. The incredible environmental and financial wealth found in these waters, and under the seabed gave way to the term - Blue Amazon – relating to the Amazon Jungle. The Blue Amazon officially covers an area of 3.5 million square kilometers. However, Brazil is calling on the United Nations to expand its borders to the limits of the continental shelf, which should raise the sea area to about 4.5 million square kilometers - equivalent to half of Brazil's land area.

To protect this natural heritage and guarantee Brazilian sovereignty at sea, the Brazilian Navy (BN) invests in the expansion of its naval force and in the development of a viable defense industry. An essential part of this investment is the Submarine Development Program (PROSUB). The National Defense Strategy, launched in 2008, established that Brazil needed to have a major naval force, including a submarine with nuclear propulsion. In that same year, a technology transfer agreement was signed between Brazil and France in the area of submarine construction. The program is enabling the production of four conventional submarines (S-BRs), which will be added to the fleet of five ageing and obsolete conventional submarines, and the building of the first Brazilian submarine with nuclear propulsion (SN-BR), all made in Brazil at a purpose build state-of-the-art Navy shipyard on the south coast of the state of Rio de Janeiro.

Of the four conventional submarines already being built, the first to be launched was the Riachuelo (S40). Now going through a fitting out phase before beginning ocean trials, the S40 was launched on December 14, 2018. The last of the modern conventional submarines is scheduled be launched by the end of 2022. The Humaitá (S41) should be launched in 2020, followed by the Tonelero (S42) in 2021 and the Angostura (S43) in 2022. The name of the first submarine, Riachuelo alludes to the Riachuelo Naval Battle, considered decisive in the Paraguayan War (1864 to 1870), and an outstanding victory for the Brazilian Navy. 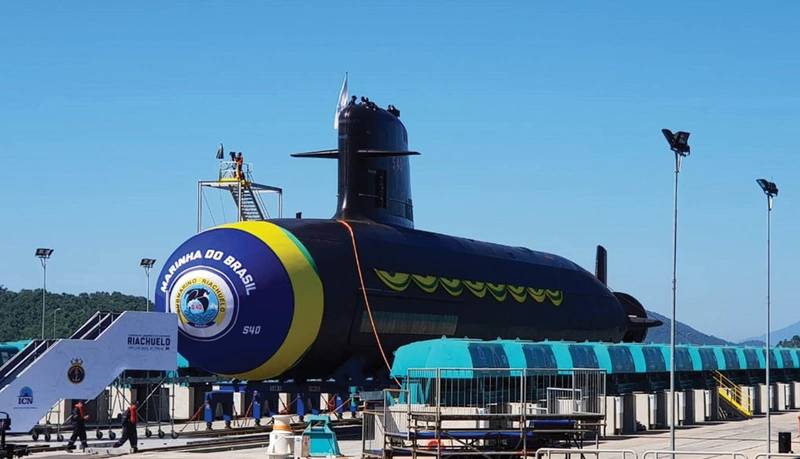 S 40 submarine atop the_submarine elevator. Image Marinha do BrasilSubmarine S 40
The Riachuelo class submarines are based on the Scorpène class, measuring  71.62 meters long with a displacement of 2,200 tons in immersion. It has a capacity for 35 crew, is able to spend 70 days at sea and can submerge up to 300 meters.

“It is a great satisfaction to lead a crew that is very well prepared and will operate a very modern, technologically upgraded submarine and will certainly increase greatly our ability to defend the Blue Amazon," said S 40s skipper, Corvette Captain Edson do Vale.

The four S-BR submarines will be larger than the Scorpène class acquired by the Chilean, Malaysian and Indian Navies. “A review of the entire project was carried out and, thus, the need to incorporate an intermediate section was identified, in order to allow the expansion of berths, fuel oil tanks and storage spaces, thus increasing the original capacity of our submarines at sea on patrol,” said Fleet Admiral Eduardo Bacellar Leal Ferreira. Admiral Ferreira was the Commander in Chief of the BN up to the end of 2018.

They will be armed with six 21-inch torpedo tubes for up to 18 F21 torpedoes and/or SM39 Sub Exocet missiles and underwater mines. It will also be equipped with two periscopes, one traditional and the other optronic, capable of sending images directly to the MFCCs (Multifunction Common Console). S-BRs will also have two Contralto-S countermeasure launchers for CANTO torpedo decoys.

When asked about the delay of nearly one year for the S 40 to be launched, Fleet Admiral Leal Ferreira explained that “The construction schedule for the first conventional submarine (S-BR1) was modified to include the time necessary to adapt to the French construction techniques and the design changes required to meet the operational requirements established by the Brazilian Navy”.

The Scorpène has a hydrodynamic hull built with HLES 80 steel, derived from what is used currently in French nuclear submarines. Some technologies used in the "Amethyste" and "Le Triomphant" (nuclear) classes, such as the SUBTICS system, are also used in Scorpène.

Transfer of Technology
The agreement between Brazil and France for the Subsea Development Program (PROSUB) has three basic premises: technology transfer, nationalization of equipment and systems, and training of personnel. The technological transfer takes place in the areas of submarine design and construction and industrial infrastructure.

The ToT for the construction of the conventional submarines or S-BRs has been taking place since 2010 in the city of Cherbourg, France, where more than 250 engineers and technicians from the BN, NUCLEP (Nuclebrás Heavy Equipment) and Itaguaí Construções Navais (Navy shipyard) have already been qualified. The technology transfer process continues in Brazil, with the technical consulting activities during the project detailing the modified parts of the conventional submarine.

“PROSUB has as one of its main goals the ToT, through personnel training and the search for a high index of nationalization. This generates benefits for Brazil, of a technological and industrial nature, including not only the naval market, but also other segments that supply goods and services in the country,” said Fleet Admiral Ferreira. The program has a total cost forecast at R$35.5 billion (US$9,36 billion) by 2029 when the nuclear submarine should be ready. So far, the Brazilian Navy has spent half of this budget.

Diference in size between the_S-BR and SN-BR-submarines. Image Marinha do Brasil

The U.S. Navy on Monday awarded a $34,999,948 to L3 Technologies, Inc. for the development of a single medium unmanned surface…