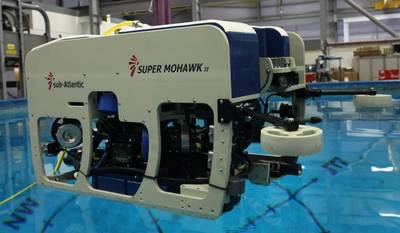 Indonesian mining firm Amman Mineral has ordered an ROV from Forum Energy Technologies to support its mining operations at Indonesia's second-largest copper and gold mine.

Forum Energy Technologies said Friday that, under the order, it would supply one of its observation-class remotely operated vehicles (ROVs), to be deployed at Batu Hijau on the island of Sumbawa, Indonesia, for subsea mining operations.

The Sub-Atlantic brand Super Mohawk II ROV system will be equipped with two five-function manipulator arms for complex underwater procedures. The new asset will replace the company’s current Super Mohawk ROV and incorporates much of the existing surface equipment.

Per the ROV company, the Super Mohawk II is well-suited for all inspection and light work tasks including non-destructive testing, seabed analysis, scientific survey, and data sample collection.

According to Forum Energy Technologies, this is the second time Forum has delivered one of its observation-class ROVs for work relating to the mine, having supplied the quarry’s previous owners, PT Newmont Nusa Tenggara, with a Super Mohawk previously.

"The Super Mohawk II ROV will be used to perform regular deep-sea tailing placement monitoring programs to ensure that the marine environment is highly preserved. The use of hi-tech and implementation of mining best practices demonstrate our commitments in environmental stewardship,” said Kartika Octaviana, Head of Corporate Communications Manager Amman Mineral.

The ROV system will be manufactured at Forum’s UK facility at Kirkbymoorside in Yorkshire and delivered in the first quarter of next year. This will be the company’s 37th Super Mohawk system deployed for global operation and the fourth to be built at its Kirkbymoorside manufacturing facility since the first one was produced in 2002.

Kevin Taylor, Forum’s Vice President - Subsea Vehicles explained, “Forum has a strong reputation around the world for manufacturing high-quality, robust ROVs and associated auxiliary products for the oil and gas, renewables, navies, aquaculture and academic industries. This contract demonstrates the value our vehicles can offer to the mining community as well.

“This is the second ROV we have delivered to Batu Hijau and I am looking forward to seeing our system delivering the required operational resilience and performance standards expected in such a safety-critical sector,” added Kevin Taylor.